Chimpay prepares itself every last weekend of August for the annual event that attracts thousands of faithful across the country and the world that will renew their faith in the Blessed Ceferino Namuncura. 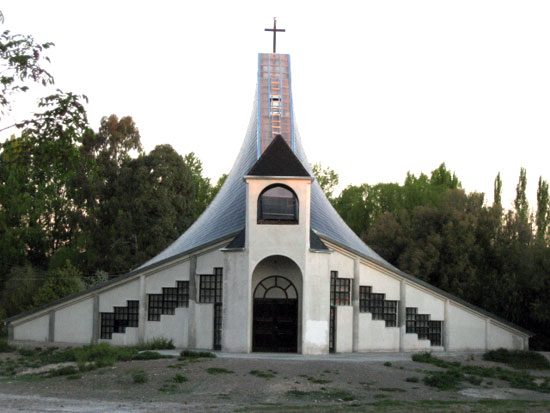 
The town of Chimpay is located in the region called Middle Valley in the province of Río Negro and it is known as the cradle of Ceferino, the "saint of Patagonia."

Ceferino was a young Mapuche that thousands of people from Argentina and the world revere because they consider him the lily of Patagonia. Each year, at the end of August thousands of pilgrims come to the shrine located in this town of Rio Negro to commemorate the date of his birth, as a form of appreciation and to renewal of faith.

Ceferino was born in 1886 and died in Rome on May 11, 1905, provided only 18 years. He was the son of Rosario Burgos, a huinca (name used by native peoples to designate the descendants of Spanish), and the chief Manuel Namuncura. As a boy he studied as a boarder in the college of salecianos, where he learned the Castilian, was instilled Catholicism and studied the catechism.

It is said that Ceferino was a teammate and friend of the singer Carlos Gardel, and that together they joined the choir of the Chapel, life's coincidences or curiosities of fate.

His health began to deteriorate and he was diagnosed with tuberculosis. He was taken to Italy to recover and continue studying the priesthood. Three years after of the establishment of the disease he died. It passed almost twenty years before his remains back to Argentina and were taken to Fort Mercedes (Pedro Luro), a place that at that time was very representative for the missionaries of the Patagonia. 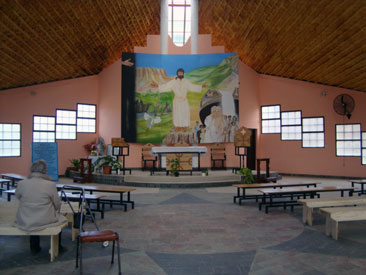 Interior view of the Chapel. Photo courtesy of Cecilia Ruz.

The acclaimes order to declare Ceferino proclaimed a saint by many years, thousands of people believed and put their faith in the "little Indian of Patagonia." In 1944 it began the beatification cause, but only on July 7, 2007, Pope Benedict XVI signed a decree to declare him Blessed. And on November 11 of the same year Cardinal Tarciso Bertone performed the beatification ceremony in the eyes of over 100.000 people. This event was more than eloquent for hundreds of thousands of devotees, that before any appointment, they consider him the saint of Patagonia.

The miracle which decrees him Blessed was the healing of a young mother who, having been affected in uterine cancer, she could give birth. A Vatican medical board felt that this event had been a miracle. Both mother and her family claim that she was able to conceive after the prayers and faith entrusted to the saint of Patagonia.

Each year is expected a mass call to celebrate another pilgrimage to the shrine of Ceferino. It starts from the so-called "Cave of the turkey" to the Ceferiniano Park of Chimpay, where it is the sculpture of the saint.

In the afternoon the official Mass takes place in the park near the monument, the prayer "Next to Jesus in the Eucharist" is said and the song "Young sings to the earth" is sang, it is about delegations from all over the country that congregate at this meeting.

The next day, Sunday, the "Prayer of the Dawn" is prayed, the procession from the Cruz of the 5º Graveyard is done, then there are masses and in the afternoon the "Young People and Children with Ceferino" sing.