In Patagonia.com.ar we propose you a journey of nearly 2700 km (half gravel and half asphalt) so you can discover the vastness of Patagonia Argentina in no hurry to get to know in detail every step of the way. 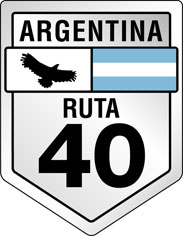 The legendary National Route 40 crosses the country from south to north, with its kilometer 0 at the tip of the continent in Cape Vírgenes, Santa Cruz, makes a route parallel to the Andes mountain range that reaches La Quiaca in Jujuy, adding approximately 5000 km and connecting 11 provinces.

While its pass by Patagonia, the Route 40 founded in 1935, crosses four provinces of Patagonia, where you will appreciate the typical Patagonian mountain range scenary surrounded by mountains, lakes, rivers, glaciers, hills and other geographical features to be admired by the human eye.

If we start the tour in the province of Neuquén, we will find the villages of Buta Ranquil and Barrancas, immersed in the north of Neuquén a place dedicated mainly to sheep. Then we pass through the ancient capital of the province, Chos Malal, for Las Lajas and reach Zapala. There we can access the ski resorts of Primeros Pinos or Batea Mahuida taking National Route 22, or continue to the junction with Provincial Highway 234 where you can visit the cities of Junín and San Martín de los Andes, that are within the Lanín National Park, and then go around the lake Nahuel Huapi on Route 231 to Villa La Angostura, which is located within the Los Arrayanes National Park that bears its name to the huge number of these trees. 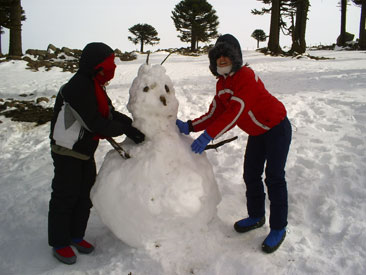 Primeros Pinos: the closest winter resort from the capital of the province of Neuquén.

From Va. La Angostura we can take the National Route 23 and reach the city of San Carlos de Bariloche, the first destination in the province of Río Negro on the shores of Lake Nahuel Huapi. But if we return to Route 40, crossing the provincial boundary (between Neuquén and Río Negro) at the height of the Alicurá dam and you will find Pilcaniyeu at the junction with the Provincial Route 23 which connects the province by the called South Line, and finally we find Ñorquinco, from where we can take a gravel road and get to El Bolsón, at the foot of the hill Piltriquitrón (you can also access this town along the 234 from Bariloche).

Following our tour of the longest road in Argentina, we cross another limit interprovincial and landed at Chubut, where the first resort is El Maitén and then Leleque, a city that can be reached coming from El Bolsón, passing through the towns of Lago Puelo, El Hoyo and Epuyén. 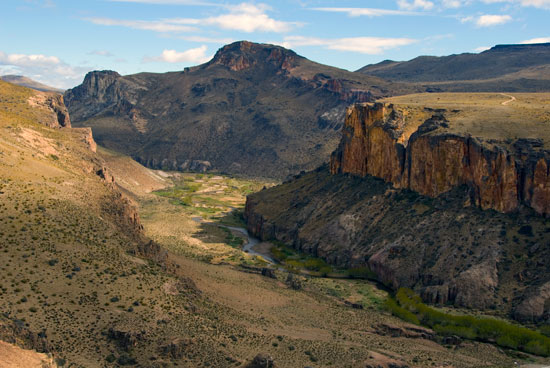 The paintings of this site have more than 10,000 years old. Photo courtesy of A. Patrian.


From our last destination we continue the path and reach to Esquel and Trevelín in the vicinity of the winter sports center La Hoya. Both in Esquel and El Maitén you can tackle the tourist train La Trochita.

Within this vast province we will also pass by Tecka, Governador Costa (where the paved road ends), and Alto Río Senguer and Río Mayo until the last boundary with the province of Santa Cruz. 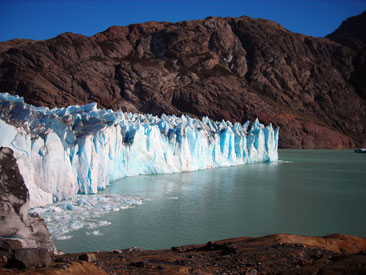 The Perito Moreno Glacier receives thousands of tourists annually from around the world. Photo courtesy of Daniel Semper.

In the last province to go we will accede to the cities of Perito Moreno and Los Antiguos, the latter located on the southern shore of Lake Buenos Aires by Provincial Route 43. After that, we go into the territory of the Perito Moreno National Park, where you enter the second of the heritage sites of humanity: the Cave of the Hands on the Pinturas River.

Following the tour to the south you reach the entrance to El Chaltén, taking the intersection with Provincial Route 31 in the town of Tres Lagos. This village is located within Los Glaciares National Park, where we found one of the greatest tourist attractions of our country, but the most important and declared World Heritage by UNESCO: the Perito Moreno Glacier, in the city of El Calafate, which we access taking Provincial Route 11 from the mythical 40.

Ending our journey, we reach the border towns of 28 de Noviembre and Río Turbio that give access to wthe inter sports center Vandelen. After that, we have left to go the last kilometers to reach the city of Río Gallegos, capital of the province of Santa Cruz, where the route Route 40 crosses several narrow gauge train, which since 1951 move the production of coal to the port of Punta Loyola in the capital Santa Cruz being the southernmost railway in the world trade. From there are a few kilometers to Cape Vírgenes in the south of the continent from where there is the Strait of Magellan. 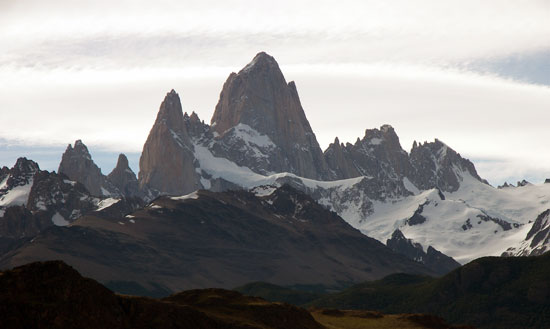 The Fitz Roy Hill is located in the town of El Chaltén. Photo courtesy of Jan Zakelj.
Share

Easter ir Chubut Chubut is a city that offers mountains, plateau and coast with varied landscapes and attractions to visit. In Easter wait for tourists tempting them with offers like visit Los Alerces National Park, see dolphins in Playa Unión, get close to the penguins at Punta Tombo, among many other things.
Touring the colors, the flavors and history of the area From the picturesque Trevelín, with its teahouses, passing through the Futaleufu dam, Los Alerces National Park, and Esquel, the mountain range has places worth knowing. Also, a look at the history of the place.
A tour of the province of Chubut The province of Chubut has three distinct landscapes: the mountains to the west, the coast to the east and central plateau. Also in the lower part of the Chubut River, which rises in the mountains, it is form a fertile valley.
North-coast circuit In this note we present the locations of the northeastern region of the province, those on the north coast of Santa Cruz, as Pico Truncado, Caleta Olivia and Puerto Deseado.
North-Andean Circuit The north of the Santa Cruz Mountains offers diverse landscapes and opportunities to immerse yourself in nature. Can be found Jaramillo Petrified Forest, the largest cherry production of the country in Los Antiguos and the town of Perito Moreno among other attractions.
Cueva de las Manos: a Cultural Heritage of Humanity The rock art that keeps the Cueva de las Manos, the oldest known of South American peoples led UNESCO to declare it Cultural Heritage of Humanity. The whole surrounding area is a rich archaeological and paleontological site.
South-Coastal Circuit The provincial capital, wildlife reserves and ideal places for fishing and other outdoor activities are the options presented in the southern province of Santa Cruz.
South-Andean Circuit The southwestern province of Santa Cruz is one of the main destinations in Argentina, finding there the glacier Perito Moreno. You can also visit El Chaltén with endless possibilities for trekking and Río Turbio with pronvicial center of winter sports, among other attractions.
Proposals for Easter We offer six destinations to spend a mini vacation at Easter. From the mountains, beaches to trips on the Trcohita.
When travel by Patagonian routes The thing to consider before heading to the Patagonian routes.
See all Articles