The Perito Moreno glacier is near El Calafate, a territory ruled by the eternal ice. Whether by land, sea or walking to the glacier, this is something everyone should see once in life.

At 80 kilometers from El Calafate along Provincial Route N º 15, rises the Perito Moreno glacier. Along with 12 other glaciers form the so called Continental Ice , which is a mantle of ice and snow covering the Southern Cordillera along 350 kilometers. The Perito Moreno reaches 5 kilometers from the front, 60 meters high and in the hiking season is possible to observe the detachment of huge blocks of ice in the waters of Lake Argentino that then sail through the Canal of the Icebergs.

The entire area is within Los Glaciares National Park, created in 1937 in order to preserve the continental ice field, his thirteen glaciers and various sub-Antarctic forest environment and the steppe of Patagonia.

This park consists of 30 percent ice (2,600 square kilometers). Between the glaciers in the place there are the Upsala (the largest of all), Spegazzini and Perito Moreno. The unique activity of the latter is because the park became part of World Heritage Site in 1981. It happens that in addition to the whiteness of its surface and the blue tones of its walls, leaving deep traces in the memory of the tourist, this is one of the few glaciers in the world and the only one of the ice in Patagonia that continues to advance at a rate of 100 meters per year. This movement generates one of the most anticipated events for visitors: the breaking of the ice dam formed by the glacier. 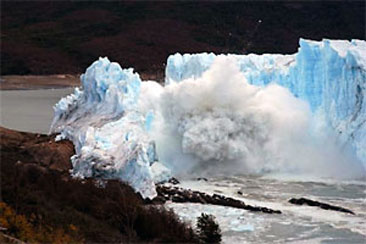 The breaking of the dam that form the Perito Moreno Glacier.

This marvel of nature occurs at irregular periods. The last three occurred in 2004, 2006 and 2008. There are no scientifif estimates on the next break and it is not possible to know how many times you can enjoy this wonder, since the Perito Moreno and other glaciers are suffering the consequences of global warming.

While it is not possible to see the break, a visit to Perito Moreno is undoubtedly a must for those traveling on Santa Cruz lands.

Even when the protagonist of a visit to Calafate is the glacier, all around is delicious, balanced with the beauty of the ice.

The hills Onelli and Bertrand are guarding the Perito Moreno whiteness. There are also the Chalten, Fitz Roy (3,375 m) and Torre (3,128 meters) visited by climbers around the world, especially in the summer.

The right framework is provided by the flora, composed of lengas, coihues and ñires that harbor species of forest as the huemul and red fox. Finally, you can enjoy the black-necked swans, woodpeckers of Patagonia, eagles and the mighty condor that spreads its flight in the high peaks.

Perito Moreno Glacier: the eighth wonder of the world 1The Perito Moreno glacier is considered the eighth wonder of the world because of the spectacular views it offers. The imposing mass of ice surrounded by endless forests and mountains is a spectacle that few want to miss when traveling to Patagonia.
Perito Moreno Glacier, what you need to know Every year the Perito Moreno glacier generate expectations when it seems ready to breakup. Some information on its characteristics and its history to help understand this phenomenon.
The periodic breaking of the Perito Moreno Glacier The Perito Moreno Glacier is an active glacier. It is one of the few advancing glaciers in the world, and the only one in Patagonia. It advances approximately 100 meters per year, generating another phenomenon of shoking beauty: the breaking of the dam it forms in the brazo Rico of Lago Argentino.
Punta Bandera Naval detachment The Punta Bandera Argentina Naval detachment is located 45 kilometers from El Calafate. Since its creation in 1978, the detachment provides professional services.
The legend of the calafate The tehuelches lived in the El Calafate area and had a legend about the birth of the bush that gives the name of the town. "He who eats calafate will always return"
Glaciers, forests and mountains There are infinite possibilities for those who tour the glacier region. On foot, by car or by boat, all are good options to explore this unique area of ​​Patagonia, Argentina.
Ice Festival in Calafate For three weekends in a row, in July and August, the Ice Festival is held in El Calafate. True to its name this festival pays tribute to ice with skating, ice hockey, torchlight parades, sleds, sculptures and a "Chueca" match, a very popular sport typical of the area.
Lake Argentino Lake Argentino is the largest in Patagonia with its 1,560 square kilometer, and the third one in South America. At 185 meters above sea level, it has a length of 125 km and a maximum width of between 14 and 20 kilometers.
Trekking on the Perito Moreno Glacier 2Walking on the glacier Perito Moreno is a fascinating opportunity that is suitable for all and does not require much effort.
Glaciarium, the Museum of Ice in Pataognia El Calafate has the first museum of ice in the country and Patagonia showing entertaining scientific information on the history of ice, glaciers, flora and fauna.
See all Articles