The periodic breaking of the Perito Moreno Glacier See map

The Perito Moreno Glacier is an active glacier. It is one of the few in the world and the only advancing in Patagonia, unlike others such as Upsala, which are becoming extinct. 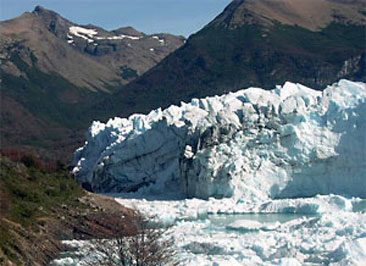 The glacier moves, touches the opposite shore and forms a dam that stops de flow of water.

This advance of approximately 100 meters per year is generating another phenomenon of shoking beauty: the breaking of the dam that forms in the brazo Rico of Lake Argentino, as with the advancing glacier, touch the opposite shore and forms a dam that stops the passage of water. Then the water seeps under the glacier and begins to undermine its base.

In 1917 occurred the first break. The process was repeated many times, at regular intervals that even have to fear for the demise of so prodigious show. Is that for the break occurs is necessary to comply with a series of steps that depend heavily on the action of both natural and other harmful changes made by the man on the environment.

Lake Argentino, water body in which lies the town of Perito Moreno Ice, has several arms. The one called Rico is behind the Magallanes Peninsula and flows into Lake Argentino by the Icebergs Canal. When the glacier advances and touches the coast of the peninsula forms a dam that prevents the arm Rico drain into the lake. 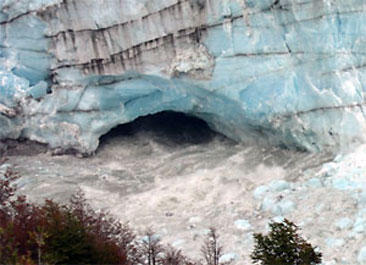 Water seeps under the glacier and begins to undermine its base.

This arm continues receiving water and snow up to exceed the level of the lake by 8 or 10 meters and increasing pressure on the dam. For it to drop the water begins to seep through the areas where the glacier has ground contact. The passage of water erodes the base of the dam until the pressure is unbearable and that's when the fracture occurs as expected, which generates the unforgettable phenomenon.

One of the latest breakdowns was in 1988 and when the people feared for his disappearance happened again with unexpected frequency in March 2004 and 2006. Experts say it is not possible to predict such an event.

There are reasons to be attentive to the work of ice in the Perito Moreno. Each fracture is unique and unrepeatable. And while it is difficult to predict what will happen in the coming years, we expect that to happen again, to once again enjoy the beautiful spectacle of this giant in Patagonia.

Another memorable break was in 2008 occured in winter. Was an unusual event because these phenomena are common in summer.

The beginning of the end. The water eats away the dam and the glacier collapses.

From the Secretariat of Tourism of Santa Cruz have clarified some mistakes made in talking about the mythical Perito Moreno. One of them has to do with the size of the colossus. The truth is that the Perito Moreno has a length of 30 km, an area of ​​257 km2 and a height ranging from 50 to 70 meters above the lake level.

And another is related to the idea that spreads about "the breaking of the Perito Moreno glacier occurs cyclically every four years." The historical evidence shows that the first openness was in 1917 without specifying the time of the year, in 1926 the geologist and founder of the paleontological museum in Trelew, Egidio Feruglio, spoke of an openness to "allow the passage of a small boat" , in February 1940 rupture of the glacier front occured and then in 1942, 1947, 1949, June / July 1951, March 1952, March 1953, 1956 and then a big break until 1966.

Perito Moreno Glacier: the eighth wonder of the world 1The Perito Moreno glacier is considered the eighth wonder of the world because of the spectacular views it offers. The imposing mass of ice surrounded by endless forests and mountains is a spectacle that few want to miss when traveling to Patagonia.
Perito Moreno Glacier, what you need to know Every year the Perito Moreno glacier generate expectations when it seems ready to breakup. Some information on its characteristics and its history to help understand this phenomenon.
Punta Bandera Naval detachment The Punta Bandera Argentina Naval detachment is located 45 kilometers from El Calafate. Since its creation in 1978, the detachment provides professional services.
The legend of the calafate The tehuelches lived in the El Calafate area and had a legend about the birth of the bush that gives the name of the town. "He who eats calafate will always return"
Los Glaciares National Park The Perito Moreno glacier is near El Calafate, a territory ruled by eternal ice. The entire area is inside Los Glaciares National Park, created in 1937 in order to preserve the continental ice field, its thirteen glaciers and various sub-Antarctic forest environments and the steppe of Patagonia.
Glaciers, forests and mountains There are infinite possibilities for those who tour the glacier region. On foot, by car or by boat, all are good options to explore this unique area of ​​Patagonia, Argentina.
Ice Festival in Calafate For three weekends in a row, in July and August, the Ice Festival is held in El Calafate. True to its name this festival pays tribute to ice with skating, ice hockey, torchlight parades, sleds, sculptures and a "Chueca" match, a very popular sport typical of the area.
Lake Argentino Lake Argentino is the largest in Patagonia with its 1,560 square kilometer, and the third one in South America. At 185 meters above sea level, it has a length of 125 km and a maximum width of between 14 and 20 kilometers.
Trekking on the Perito Moreno Glacier 2Walking on the glacier Perito Moreno is a fascinating opportunity that is suitable for all and does not require much effort.
Glaciarium, the Museum of Ice in Pataognia El Calafate has the first museum of ice in the country and Patagonia showing entertaining scientific information on the history of ice, glaciers, flora and fauna.
See all Articles