In the Patagonian soil it were found the oldest remains and impressive dinosaurs. The agricultural, livestock, oil and gas economy is strong, but tourism it's worth to do between their ranches, farms and, of course, fossil beds. 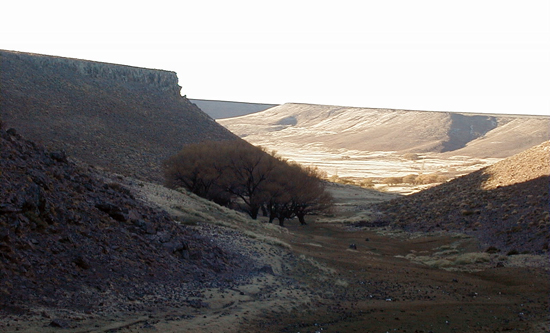 The Bajo de Vaca Lauquen in the rural area of southern Maquinchao. You can see the typical plateu of this region, where there are cave paintings of 4,000 years approx. Photo courtesy of Javier Llancapan.


This is about the plateau, that geography, that unlike the mountain and the sea, is not present in any other region of the country and marks the boundary between what is Patagonia and what is the humid Pampas.

The Plateau is a large expanse of land that lies between the mountains and the coast of the Patagonian provinces. This will include the towns of the south line of Río Negro as Ingeniero Jacobacci, Maquinchao and Los Menucos, all near the Somuncurá Plateau.

In Chubut stands the city of Sarmiento, in south-central province, whose main attraction is the José Ormachea Petrified Forest. In Santa Cruz we can mention Pico Truncado on the northeast, a typically oil town.

In Neuquén you must clarify that the plateau is located between the mountains and the valley, because this province has no coastline. So we can mention places like Zapala, Cutral Có, Plaza Huincul, Arroyito, El Chocón and El Sauce, among others.

Zapala, a strategic city Zapala is located in the center of the province of Neuquén. It has 35,000 inhabitants and it is a necessary step toward more tourist spots in Patagonia.
Primeros Pinos: an ideal ski resort for beginners Primeros Pinos is one of the best ski resorts for those who have never skied because the tracks have gentle slopes. In a family atmosphere you can enjoy snow skiing, walking on motorcycles, having fun riding sleds or why not sliding on the snow in the famous "ass-skate".
Pass Pino Hachado The International Pass Pino Hachado is located in the province of Neuquén to 1884 meters high. It is 3 km before the border crossing with Chile and it is accessed by doing 500 meters from National Route 242.
Zapala: between cement and tourism Along with Aluminé, Zapala makes part of the Pehuenia area in the center of the province of Neuquén. With more than 35,000 inhabitants, it is located 1012 meters high above sea level, on the intersection of National Routes 22 and 40, and the Provincial Route 13. Crosses that became it an obligatory stop for Andean places in the province of Neuquén.
Laguna Blanca National Park From Zapala you can visit the Laguna Blanca National Park. It is the most important nesting area of Patagonia with about 100 species of birds, and where there is a well-signal viewpoint and a small museum in the ranger's house.
Sarmiento: getaway to the Petrified Forest With an economy based primarily on farming and livestock, Sarmiento has several attractions, but the most important is the Petrified Forest.
José Ormachea Petrified Forest After the folding which gave rise to the Andes, the great Patagonian forests were history. The Ormachea Petrified Forest is a preserved monument from that era.
Sarmiento: what to see and do In the surroundings of Sarmiento you can perform various activities. From fishing on the famous Senguer river to tours by neighboring farms. You can also do visits to volcanic caves, rock paintings, rock climbing, etc.
Petrified Forests How was originated the Petrified Forest of Sarmiento? Earthquakes, volcanic eruptions and hurricanes and other wheater phenomenons ended up with a forest in full swing to make it one petrified.
Sierra Grande: a town born and detained by mining For years the town of Sierra Grande was noted for having the largest iron mine in South America. Today, the company closed, struggling to survive on tourism.
See all Articles