The big question about the petrified forest is, what forces acted on these trees over a hundred yards to knock them down and petrify? It seems that they were felled by a force of great magnitude that managed to annihilated them in the fullness of their development. 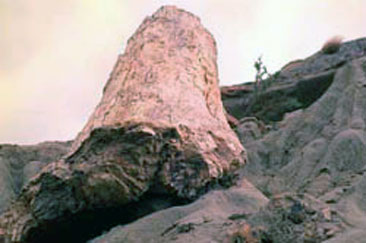 Earthquakes, volcanic eruptions and hurricanes become the fertile forest that was the region millions of years ago, in a logs cemetery.

This seemed to be confirm by the remains, also fossilized, of its fruits, seeds and roots which are still embedded in the ground.

The strongest theory is that a hurricane raged in the forests. Scientists agree on the assumption that this region was hit constantly by weather phenomenons of this nature, accompanied by earth tremors and volcanic eruptions.

At that time it were also followed a series of earthquakes that led origin to the Andes.

From this combination of climatic factors and orogenic came thick clouds of smoke and ash that covered completely the fallen trees. From there it began to change the climate of the region, drastically altering the Patagonian ecosystem and transforming the geography leaving in the obscurity the giants of wood.

José Ormachea Petrified Forest After the folding which gave rise to the Andes, the great Patagonian forests were history. The Ormachea Petrified Forest is a preserved monument from that era.
Sarmiento: what to see and do In the surroundings of Sarmiento you can perform various activities. From fishing on the famous Senguer river to tours by neighboring farms. You can also do visits to volcanic caves, rock paintings, rock climbing, etc.
See all Articles