The legend of the calafate See map

Ñires, lengas and coihues forests begin to make a characteristic tone, announcing the fall and giving the trees a colorful range, from deep red through shades from gold to orange. This transformation has been repeated year after year, since time immemorial.

The tehuelches lived in this landscape. They are the original owners of the land, who at the onset of winter began to emigrate walking north, where the cold was not so intense and the  hunting wasn't missing. 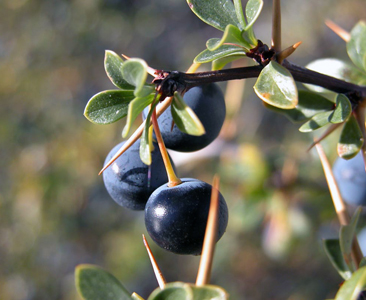 In connection with this migration tradition in Patagonia preservs a legend. It is said that once Koonex, the old woman from a tribe of tehuelches, could no longer walk because their tired old legs were exhausted, but the time could not stop. So Koonex understood the natural law of destiny. The women of the tribe made a guanaco-skin tent and gathered much wood and food to leave with the old woman, saying goodbye to her with the song of the family.

Koonex, back home fixed his tired eyes in the distance, until the people of his tribe was lost after the edge of a plateau. She was left alone to die. All living creatures were going away and began to feel the heavy slumber and enveloping silence.

The multicolored sky was slowly dying. Many suns and many moons passed by until the arrival of spring. Then the shoots were born, arrived swallows, plovers, happy chingolos and the chattering parrots. Life again.

On Koonex tent landed a flock of little birds singing happily. Suddenly the voice of the old woman was heard who, from inside the tent was scolding them for leaving her alone during the long, harsh winter.

After the surprise a "chingolito" replied, "we went away in the fall because the food becomes scarce. Also during the winter we have no place to take shelter." "I understand you," replied Koonex, "so, from now on you will have food in autumn and good coat in winter and I'll never be alone" and then the old woman was silent.

When a gust suddenly turned the skins of the tent instead of Koonex there was a beautiful thorny bush of fragrant yellow flowers. By mid summer the delicate flowers became fruits and before the fall began to mature taking a blue color of exquisite taste and high nutritional value. From that day on some birds did not migrate more and those who were gone, hearing the news, returned to try the new fruit.

Tehuelches also tried it, adopting it forever. Seeds scattered throughout the region and, thereafter, "who eats Calafate, always returns".

Perito Moreno Glacier: the eighth wonder of the world 1The Perito Moreno glacier is considered the eighth wonder of the world because of the spectacular views it offers. The imposing mass of ice surrounded by endless forests and mountains is a spectacle that few want to miss when traveling to Patagonia.
Perito Moreno Glacier, what you need to know Every year the Perito Moreno glacier generate expectations when it seems ready to breakup. Some information on its characteristics and its history to help understand this phenomenon.
The periodic breaking of the Perito Moreno Glacier The Perito Moreno Glacier is an active glacier. It is one of the few advancing glaciers in the world, and the only one in Patagonia. It advances approximately 100 meters per year, generating another phenomenon of shoking beauty: the breaking of the dam it forms in the brazo Rico of Lago Argentino.
Punta Bandera Naval detachment The Punta Bandera Argentina Naval detachment is located 45 kilometers from El Calafate. Since its creation in 1978, the detachment provides professional services.
Los Glaciares National Park The Perito Moreno glacier is near El Calafate, a territory ruled by eternal ice. The entire area is inside Los Glaciares National Park, created in 1937 in order to preserve the continental ice field, its thirteen glaciers and various sub-Antarctic forest environments and the steppe of Patagonia.
Glaciers, forests and mountains There are infinite possibilities for those who tour the glacier region. On foot, by car or by boat, all are good options to explore this unique area of ​​Patagonia, Argentina.
Ice Festival in Calafate For three weekends in a row, in July and August, the Ice Festival is held in El Calafate. True to its name this festival pays tribute to ice with skating, ice hockey, torchlight parades, sleds, sculptures and a "Chueca" match, a very popular sport typical of the area.
Lake Argentino Lake Argentino is the largest in Patagonia with its 1,560 square kilometer, and the third one in South America. At 185 meters above sea level, it has a length of 125 km and a maximum width of between 14 and 20 kilometers.
Trekking on the Perito Moreno Glacier 2Walking on the glacier Perito Moreno is a fascinating opportunity that is suitable for all and does not require much effort.
Glaciarium, the Museum of Ice in Pataognia El Calafate has the first museum of ice in the country and Patagonia showing entertaining scientific information on the history of ice, glaciers, flora and fauna.
See all Articles