It name refers to a Patagonian mountain landscape typically surrounded by pehuenes (Araucaria). In these ancient trees is contained the history of patagonian native people and cultures who live there. 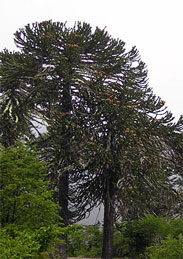 The pehuenes provide a fruit called piñón that the natives of the region, particularly the Mapuche, used as food. The Araucaria are easily recognized and are trees that can grow over 40 meters.

Villa Pehuenia was founded in 1989. It began with the cheap sale of building lots by the Neuquén government to promote this area almost unknown and slowly began to appear the first buildings.

This town has very few years of tourism. You can visit with the idea of ​​horseback riding, biking or just walking looking to feel part of nature.

It is located in central-western province of Neuquen and close to the neighboring country of Chile, 15 km from Paso Icalma by which you access the Chilean cities of Melipeuco, Cunco and doing 133 km from the villa is reached Temuco.

Those traveling from the capital of Neuquén have 310 km away up to Villa Pehuenia and it can be reached by National Routes No. 22 and 40. To the south, 180 km, is Junin de los Andes, 195 km to the north is Caviahue, surrounded by other Patagonian landscape with pehuenes.

The villa is on the shores of Lake Aluminé and it is join to the town of Aluminé through Provincial Route No. 11, passing through lakes Ñorquinco and Pulmarí on a journey of 100 km from Moquehue. This road is not paved so you have to do a few kilometers on gravel.

On the beaches of Lake Aluminé is a picnic area and slope for boats. A few kilometers more, always to the west, is a campsite with supermarket. Both the lake Aluminé as Moquehue can go boating, canoeing, kayaking and sailboating.

Fishermen can find the best areas for fishing of all kinds: trolling, spinning and fly fishing in the lakes, ponds, rivers and streams of the area.

You can not leave Villa Pehuenia without a visit to Batea Mahuida volcano. During the winter operates as a ski resort and from the crater of the volcano looming several volcanic peaks of the nearby country of Chile. 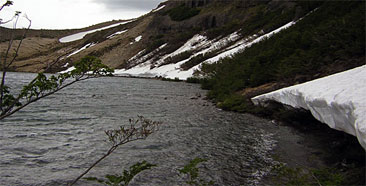 You can drive up to 300 meters before the mouth of the volcano, but because it passes through the territory of the community Puel, it is requesting authorization to enter. You can also hire their local guides.

Hikers can trek on a beautiful ride, but a tough hike. It begins in Villa Unión. The course covers a wide variety of landscapes, volcanic environment, meadows, forests of araucarias, two lakes tucked in the volcano and two lookouts.

And those who want to continue walking can do trekking to the Península de los Coihues. Starting from Cura Huapi beach (inn in Lake Aluminé). It is 6 km along the lake and the village, crossing natural forests of radales, coihues and ñires, and passed through Lake Alumine viewpoint to reach the península.

Diving under the frozen lake ice in Villa Pehuenia In Villa Pehuenia you can experience a unique activity such as diving under the ice of the frozen lake in the middle of the winter.
Batea Mahuida Snow Park There is a snow park at the volcano Batea Mahuida ideal for skiing. It is run by the Mapuche Puel native community.
Activities in the Batea Mahuida When a tourist arrives at Villa Pehuenia the first thing recommended is to go to the Batea Mahuida. There it is a Snow Park which is in charge of the Puel Mapuche Community.
Villa Pehuenia: a picturesque tourist village Villa Pehuenia stretches along the coast of lake Aluminé and has superb affordable hotel offering and restaurants and cafes for all tastes.
A weekend on the araucaria route To enjoy the pehuén in all its splendor you must travel a triangular circuit form from Primeros Pinos to Villa Pehuenia and back.
Walking excursions through Moquehue Moquehue is a mountainous area surrounded by landscapes covered with pehuenes. In the main valley is the lake of the same name that is ideal for fishing.
Patagonian Chef Festival 1Villa Pehuenia is the host of Patagonian Chef Festival which brings together producers and wineries exhibitions from the region and the province to showcase them to the community and all visitors attending.
See all Articles