Moquehue is a mountainous area surrounded by landscapes full of pehuenes. Located on the main valley and runs along a lake of the same name that among other things, is ideal for fishing. 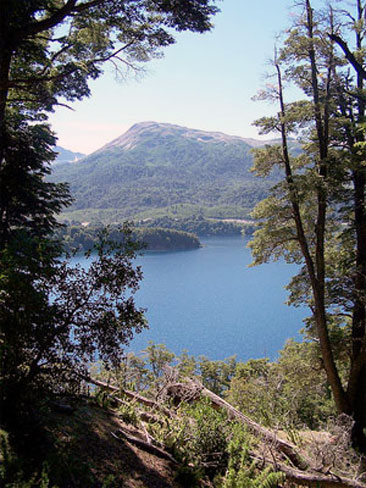 Lake Moquehue from the coihue forest.

Those who visit Moquehue can do interpretive hike with guides that was born in Moquehue and has spent several years in the area, accompanying visitors to discover the secrets of Patagonia.

Interpretative walks are low difficulty in the physical, you can do as a family, couples or friends. The interpretation is that the visitor understands the landscape, how it formed and the importance of it care.

The tours are conducted through native forest, showing the importance of taking care of our resources and see how and how much has been inferred man's hand in that biome. They recount the origins of Moquehue, the stories of its people, the workers of the mills and how life is in this mountain range.

The history of the Mapuche people, their worldview, their culture and textile art are the many other things you can learn on the tour. In one of the trails you will visit what remains of a burial, which is called "Chenque" in Mapuche language, in which explains to visitors the significance of the burials.

The dynamics of interpretation is simple language without scientific names and information overload. Are also given in English. 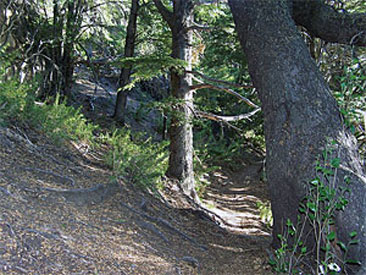 Coihues in one of the trails.

Moquehue's landscape is very diverse. It is divided by a valley and in each slope the biome is very different but complementary.

On the shady side there is a sub-Antarctic forest with species such as:

It is also densely covered by herbaceous and shrub layers. It is an area of ​​high humidity and the forest is closed.

At the opposite end of the valley has an ecotone landscape: transition to the steppe in which you can observed: 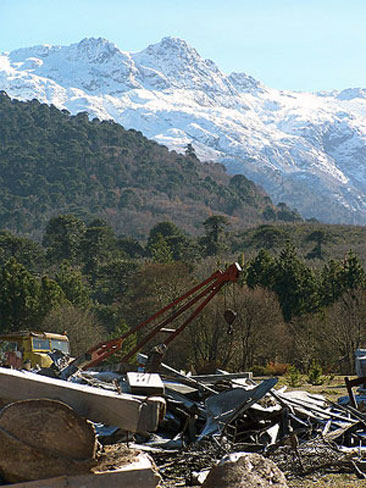 One of the three mills, now a holliday farm.

The differences between them are also in different heights: the valley is mostly covered by pehuenes and there are ñires and herbaceous and shrub and at 1700 meters high you can see Andean desert with rocky outcrops in which are seen the effects of the action of rainfall and snow.

There are marked differences in temperature between day and night. The lake, landforms of valleys and peaks are of a glacial origin like most of the formations in the region of lakes.

The pehuén gives the area a distinct character in the landscape, almost primitive. A species capable of growing in the rock and volcanic soils. Some specimens reach 1300 years and are considered a sacred tree.

Diving under the frozen lake ice in Villa Pehuenia In Villa Pehuenia you can experience a unique activity such as diving under the ice of the frozen lake in the middle of the winter.
Batea Mahuida Snow Park There is a snow park at the volcano Batea Mahuida ideal for skiing. It is run by the Mapuche Puel native community.
Activities in the Batea Mahuida When a tourist arrives at Villa Pehuenia the first thing recommended is to go to the Batea Mahuida. There it is a Snow Park which is in charge of the Puel Mapuche Community.
Villa Pehuenia: a picturesque tourist village Villa Pehuenia stretches along the coast of lake Aluminé and has superb affordable hotel offering and restaurants and cafes for all tastes.
A weekend on the araucaria route To enjoy the pehuén in all its splendor you must travel a triangular circuit form from Primeros Pinos to Villa Pehuenia and back.
Patagonian Chef Festival 1Villa Pehuenia is the host of Patagonian Chef Festival which brings together producers and wineries exhibitions from the region and the province to showcase them to the community and all visitors attending.
See all Articles