Gobernador Gregores is a town of 7,000 inhabitants that is located in the center of the province of Santa Cruz on the Chico river valley surrounded by plateaus and a prime location.

The city has a pleasant climate especially in summer. In winter there are typical snowfalls and freezing temperatures.

It is connected to other cities in the province by National Route 40 and Provincial Routes 12, 25 and 27 with connection to National Route 3. Currently land transport and air service are operating, connecting the city to different destinations in the north and south of the country.

Gobernador Gregores represents with its landscapes, flora and fauna the wider distribution ecosystem in the province of Santa Cruz, "The Patagonia steppe", forming local walks and tours around it that combine the typical landscapes of Patagonia with the rich history. The different options allow to travel quiet, virgin and inhospitable places.

But Gobernador Gregores was not always the name of this town ...

In the nineteenth century were installed the first step nightclubs and hotels. Since that time the area was a stop of military mail and trucks and cars which made the journey from the mountains to the coast transporting wool and hides. 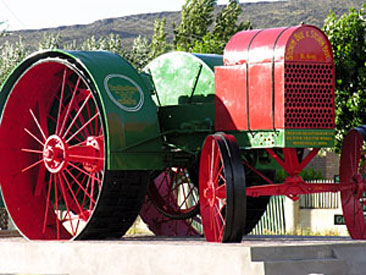 The old tractor in the center of the city.

This place was known as Cañadón León and one of the pioneers of this town was an Austrian blacksmith named Joseph Kuney Posne, who set a workshop for the repair of vehicles of the time and care for horses. This blacksmith was the first settler in the formerly "Cañadón León."

Precisely the contemporary economic activity was linked to the breeding of sheep and wool exports and once proven fertility of the valley in the area of ​​the island called Fea the city joins agricultural production.

A farmhouse and small businesses began to offer their services around the smithy and the fields began to have owners who become the protagonists of the founding of the town. During the government of Lieutenant Commander Juan Manuel Gregores it were made the first major public works which made the public activity part of people's livelihood. 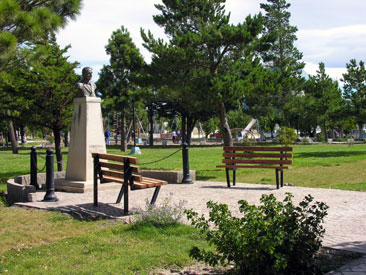 Already in 1959 the town was renamed Gobernador Gregores by request of their inhabitants, being in mind the Old Cañadón León.

Among the routes that can be done in the city, we recommend visiting:

Within the city you can take a historical tour with guided visits to execution sites that make up the "In the footsteps of the strikers". This is a tour through rooms where there were shootings of rural workers during the strike of 1921.