70 kilometers from Gobernador Gregores is Lake Cardiel, a mirror of turquoise and gray waters, famous among fishermen for its rich fish.

The lake has an area of ​​480 square kilometers and spills into the confluence of the "Meseta de la Muerte", temporary streams formed by melting snow and water which is filtered from the basalt cover. The main river is Cardiel.

Due to the low temperatures and low rainfalls there is no vegetation around. The landscape is characterized by basalt-covered plains, brown stone. In other eras this area was covered by sea, evidence of this are the findings of remains of reptiles and other species of sea animals.

During summer and Easter it is possible to fish in lake Cardiel. You can get salmonid species as rainbow trout, brook trout and landlocked salmon. You can make fly fishing and other forms, being one of the greatest fishing sites in the region. For this reason there it is held every year the Salmon Festival, in which are carried out individually and groups fishing contests.

Around it are camping areas and other activity that you can do is bird watching as these come to the lake to feed themselves.

Lake Cardiel is called in honor of Jesuit Father José Cardiel, who performed the Patagonian Salesian mission in 1746 with Quiroga and Strobel. The area has other two lakes with these names.

To access Lake Cardiel you must take National Route 40 to the intersection with Provincial Route 39 at 12 kilometers. 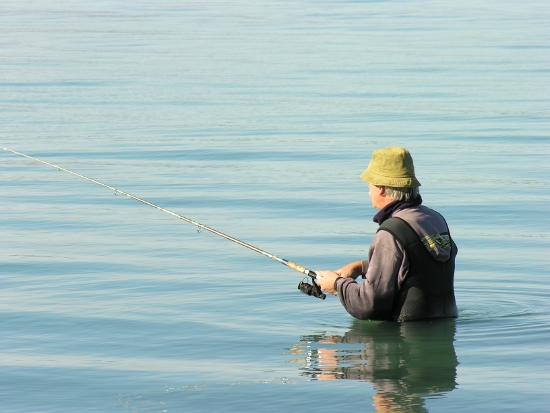 In Lake Cardiel it is possible to fish species as rainbow trout, brook trout and landlocked salmon.
Share