It is the oldest town in Neuquén (founded 1883), it reflects our history, tradition, religion, Mapuche culture and is the gateway to the Lanin National Park. It has great places for fishing as the rivers Chimehuín, Malleo, Aluminé, Quilquihue. You can also enjoy beautiful landscapes that form lakes Curruhué, Epulafquen, Paimun, Huechulafquen, Tromen, or appreciate the exotic baths Epulafquen. Another attraction is the Lanin volcano, a classic of trekking and mountaineering. Campings, traditional accommodations, regional cuisine for different budgets, fast connection to Chile for an international step Mamuil Malal (or Tromen) and the gateway to the center of Lakes Corridor.

Junin de los Andes is the perfect combination of color and landscape in the four seasons, all have something special, wonderful, almost magical that fills the eye and nourishes the soul.

Mountain village, even smaller, about 9,000 inhabitants, but in an environment of enormous beauty that its economy is based primarily on tourism and fruit growing, Junín is a point of excellence in tourism in Patagonia.

Ancient land of aboriginal communities, Junín retains the mystery and respect for the land's first inhabitants had for this paradise that are the nature, culture and history. 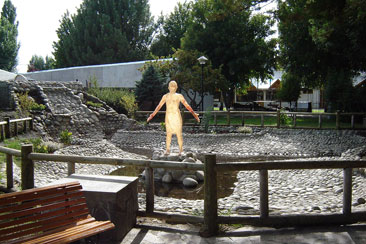 Places to visit in the city

In the San Martín square you will find marked varieties of woody species. They are where they were originally planted by Father Ginés Ponte and his collaborators. There you can see from the native Araucaria araucana or pehuén to a sequoia brought from U.S.

The Church of the Snows. By 1951 was laid the cornerstone of the Parish Nuestra Señora de las Nieves. This name comes after the snow fallen the night before its inauguration, and above the absence of a name, it was named like that. The church houses the remains of Father Domingo Milanesio the first Salesian priest to evangelize in the area in 1892 and finally settling in 1895. Today it has become the Sanctuary Nuestra Señora de las Nieves and Laura Vicuña, inaugurated on December 8, 1999.

Next to the municipal building is located Centenario Square opened for the 100 anniversary of the founding of the city of Junín de los Andes (02/15/1883 - 15/02/1983). In it rests, since then, the remains of Sergeant Vidal, founder of the outpost that gave rise to the population. 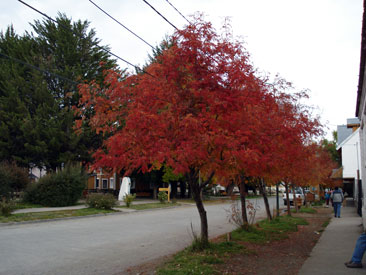 The La Cruz Hill, located west of the city, is crowned by a white cross that is visible from every locality, being a landmark since 1950 when Mr. Guillaumet, old resident of Junín de los Andes, in compliance a promise ordered to built it. It was blessed by the Bishop of Mendoza, Alfonso Maria Buteler the March 17, 1954.

The remains of Blessed Laura Vicuña rested at the foot of this hill in the early years. It is easily accessible and a vantage point from which to observe the Chimehuin river in its entirety.