The summit in the Lanín: an unforgettable experience 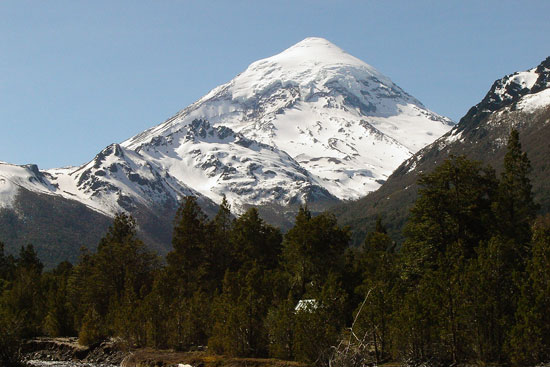 
In the area of ​​the Lanin volcano, beauty has name of lakes, valleys and mountains that can be seen as views from the shelters in the middle of the massif, and from its summit, which is 3776 meters high above sea level. There, turning on its own axis, you can admire the volcanoes Llaima, Villarrica, Quetrupillán, Osorno, Tronador and lakes Tromen, Quillén, Huechulafquen and Paimún.

The wonderful landscape of the Patagonian Andes, along the rise in recent times acquired the so-called "adventure tourism", prompted thousands of people each year decide to climb the volcano, located some 60 km from Junín de los Andes, on the road that leads the border crossing known as Tromen or Mamuil Malal.

Except for those with medical indication not to exert this journey is considered suitable for all age groups from age 14. Anyway, we recommend the climb with a national guide mountain authorized by the National Park.

You should know that in order to walk the snow-capped volcano, you have to be prepared physically, doing some hiking with a loaded backpack over his shoulders. Because once the expedition has started, it will be considered indispensable elements to take for the tour that will take two days if the weather is good.

If you lead a sedentary life, we recommend you arrange a pre-training program several months before the climb. Remember that you will need about seven hours walking on slopes and in general the weather does not help. Winds are frequent and strong and it is not unusual to unleash unexpected storms.

In the backpack will be placed warm clothing, balaclavas, sunglasses with UV filter, a sleeping bag, flashlight and crampons and ice axes that will be to use to transit the glaciers. It is also important to be equipped with energy food and a medicine cabinet.

During the first day, after traveling along a trail set amidst an incredible forest of beech and amancay flowers, you get to the base of Lanín volcano, where you begin to make the climb up by the notorious "Espina de pescado" for about 4 or 5 hours. After a time of intense climb you will arrive at one of the two shelters to spend the night and repair the body for the final to be held in the early hours of the morning.

The shelter of the Club Andino de Junín de los Andes (C.A.J.A.) is located at 2600 meters and can accommodate 14 people. The other shelter is from the Mountain Infantry Regiment at 2450 meters and is able to accommodate about 20 adventurers. There is a book where, ready to realize the desire of the summit, you can read the stories, perceptions and experiences of those who have already met the goal.

You must spend the night in the shelter to start early, something essential to have enough daylight hours to raise and lower. At dawn, the images are stunning and the spirit is renewed.

The snow is still hard, which facilitates the use of crampons. From there, the hardest of the climb: 6 or 7 hours of mountain trekking with crampons subject to the boots and ice axes in the hands. The challenge is itself.

From the C.A.J.A. shelter, you should take the slab of snow that is higher to avoid uncrossable cracks found on the left side. You should ascend for the right side for two hours of walking according to the signals.

Once the conduit ends, you must make a detour of 50 meters to the right, to avoid a rock formation of 3 meters. From that point, in summer it is possible to walk the rocks without crampons.

The hardest test is when you arrive at the pre-summit, from which you overlook the last half hour of the trip, the more demanding part. The pre-summit has snow. At the sight of the walker stnad ice towers that lead you to move the final meters for the depression to the left. Upon reaching the summit the view is incomparable and the feeling is indescribable, one is at 3776 meters high.

The total decrease of the volcano is about 6 hours, step by step, recording the most beautiful images that the region offers on the retina. The comments of those who trod the eternal snows of Lanín is unanimous and overwhelming: an unforgettable experience.