A princess is hidden in the crater

Legend say that, many years ago, lived in the volcano's summit Pillán god, god of evil, but fair and defender of nature. 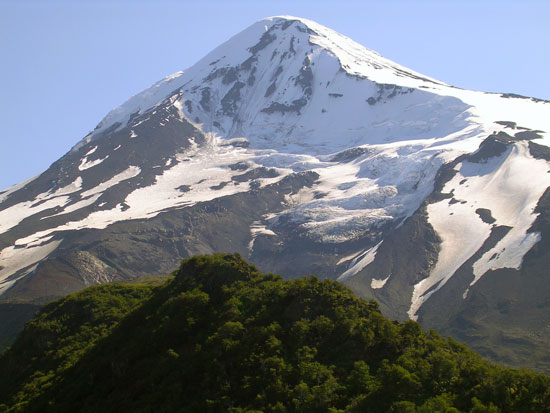 
One day the youth of the Hauiquimil tribe were chasing huemules (animals whose meat fed them and whose skin coat them). Without realizing they reached a great height, despite knowing that the Pillán was watching them. The god, seeing animals killed, was furious, arose a great storm and the volcano began spewing lava, smoke, flames and ash causing terror in the population.

They consulted the witch of the tribe, who were detained several days in a cave and returned with the solution: to appease the wrath of Pillán it was necessary to sacrifice Huilefun, youngest daughter of the cacique, beautiful and charming creature adored by all. They had to throw her body to the flames of the volcano.

The Princess should be led by the bravest youth of the tribe and it this was Quechua, to who the witch gave the necessary instructions. Quechua then charged with the girl, taking her to the place of the mountain where the winds were more intense and, as directed, he left her there.

Then a condor of eyes glistening came with his majestic flight, taking the girl in its claws, to rise and then throw it into the center of the crater. Suddenly dense clouds hid the sky and a thick snow covered the fire.

Since then, the Lanín lies silent, hiding the princess and the fire in his belly. And in the place is forbidden to hunt huemules.