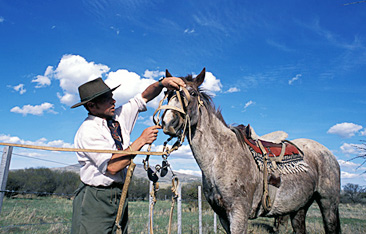 Puestero Festival seeks to exalt the values ​​of the gaucho. Photo courtesy of Deparment of Tourism of Neuquén.

The Puestero Festical, which first was national in 2011, takes place in February in Junin de los Andes.

This festival is primarily aimed at extolling the values ​​of gaucho and preserve national identity. Therefore, within the activities that take place are the great rodeos and special mounts to which attend the best riders in Latin America. There are also part of the celebration the Puesterito Day, for the kids, the Young Gaucho and the Field Women's Day. Besides stands of crafts, gaucho clothing and typical meals provide another attraction to the party.

The festival takes place since 1988 and has became the meeting point of "puesteros" across the Patagonian region and the country. It is conducted by the Traditionalist Center Huiliches to "keep alive our customs and ways that make our Argentinean tradition".

Every year in February Junín dresses up to enjoy five days in which rodeo skills and shows with local and national artists are performed and you also can taste typical foods.