During the second half of January, in the town of Río Mayo, it is performed the traditional National Shearing Festival where visitors can appreciate the skill and speed that characterizes the shearers of the area that grade and pack wool. 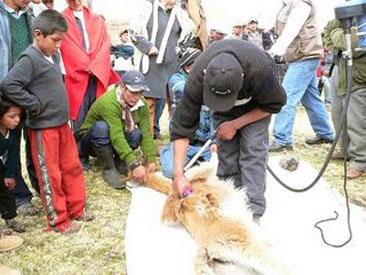 One participant showing his skills with the shearing of a vicuna.

The main event of this festival is the competition in which participants must try to make the best time of shearing without harming the animal. For this activity is practiced the shearing of sheeps, guanacos and vicunas.

You can also enjoy the spinning of wool for the view of the audience, the great rodeo featuring categories of Gurupa Surera, Crina Limpia and Doma with Bastos and Ensimera, the parade of various gauchas delegations who competed for the best rope, best plywood and best horse, and the taste of typical local dishes.

During the three days of the event, visitors will have the opportunity to be in direct contact with the rural world and the wealth of tradition and folklore of the region, thus this added to the native skills and shearing, visitor may delight itself with different artists and the charm of folk dance groups.

The choice of the Fleece Queen and the National Shearing Queen are undoubtedly an attraction of the festival, which draws several young ladies to show the public their beauty and be crowned queens of the event.

The National Shearing Festival was declared of national interest in 1985 and it annually brings together the family farm dedicated to raising and shearing sheep, and domestic and foreign tourists who join the celebration.

During January 14, 15 and 16 it was developed the XXVI edition of the National Shearing Festival. There were demonstrations of shearing, rodeo contests, booths with food and local products, also various regional and national artists participated. Among them were the humorist "Capuchón Gonzalez", the group Chamamecero "Los del Mailin", "Marcio and los Charros de Lumaco" and the group of cumbia "La Champion Liga" which closed the event.