The Municipal Museum Argentino Urquiza is in Rincón de los Sauces and has cataloged more than 400 pieces, most of sauropod dinosaurs belonging to the family of titanosaurs, turtles and crocodiles.

The sample represents the Cretaceous period and the most important example of the museum is a complete T. Rex that was found in 1996, this is the only complete specimen found worldwide. This specimen was found in the fence, a few kilometers from the town, its length is almost 15 meters and his skull was found in perfect condition.

The following year found another T. rex that lived 90 million years ago, the Rinconsaurus Caudamirus. Its name is given after the place it was found (Rincón de los Sauces) and the term caudamirus means "incredible tail" in Latin. Along with this T. rex was also found Pehuenchesuchus Enderi, a crocodile of 2 meters in length.

During 2004 and 2005 were extracted fossils from another tyrannosaur and with them those of a freshwater turtle and teeth of a carnivorous dinosaur that lived in the same era. 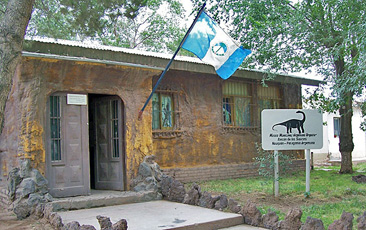 In the vicinity of Rincón de los Sauces have been found in paleontological sites where to work over the next fifteen years.

It is located 8 kilometers from the town. Here is were the remains of the Tyrannosaurus was found in 1996.

At 2 km south of the town. In 1997 were found the remains of another T. rex and the teeth of a crocodile.

It is 20 kilometers from Rincón de los Sauces. In 2000 it wwew found the remains of a specimen of T. rex and a crocodile and people are working with the finding of another dinosaur.

It is located 30 kilometers from the town. In this oilfield were found traces of titanosaurs, theropod teeth, a crocodile and a freshwater turtle.

It is located 50 kilometers from Rincón de los Sauces and here also have found remains of titanosaurs, theropod teeth and a freshwater turtle.

It is near Norambuena and there were found remains of sauropods.

Located 20 kilometers from the town. Here were found the remains of a large freshwater turtle.