The official history says that Sierra Grande was created in 1890 to serve farmers and visitors to the area and in 1944 iron deposits were discovered in its surroundings. 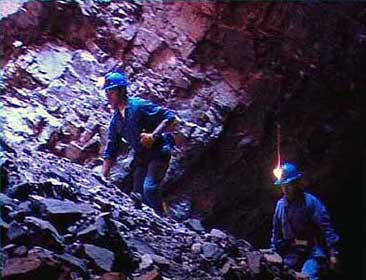 Mine tourism in the caves of Sierra Grande.

But the great history of Sierra Grande was began to write in 1969 when the company Hipasam SA settled there and began the exploitation of iron. It was a state enterprise that for over 20 years made it flourish in this town of southeastern province of Río Negro. So much so that eventually became the largest iron mine in South America. Its 96 kilometers of tunnels and 500 meters deep gave work to thousands of people.

However, the flourishing time for this company is over and with it the life of the town. In 1991, in a change of economic policy, the national government of those days decided by a Presidential Decree seal its closure. From there, the uncertainty over the place and the emigration of the inhabitants Sierra Grande became almost a ghost town, without actually killing him.

Today, Sierra Grande is trying to survive. And finding one of the pillars on the exploitation, this time touristis, of the iron mines. Its endless caverns were closed, but a project do get air. Each day, visitors can immerse themselves in its depths to relive what it was like working in the busy time of the place. The trip is worth it.

Sierra Grande is at the side of National Road N° 3, 135 kilometers north of Puerto Madryn and 117 south of Las Grutas, so it has also become a transit and rest place to these popular destinations.

With this new approach to tourism that attempts to revive Sierra Grande can be added among its attractions, Playas Doradas and Somuncurá Plateau. The town is 32 kilometers from the sea, where is the beach resort Playas Doradas, a place that has the distinction of being perhaps the only beach with sand so fine in Argentina and precisely golden. In the last years is being given a push to sell their lots, incorporate services and give more tourism range.

On the other hand, the Somuncurá plateau is home to species and geography unique in the world, it was declared a Natural Protected Area in 1993. There can enjoy from photographers and scientists to ecologists and ordinary tourists always ensure vulnerable environment of the place.

The last census of 2002 says that Sierra Grande has 8,000 inhabitants. The long-awaited asphalt National Road No. 23 gave new impetus to economic development, connecting the city with all the South Line of Río Negro with San Carlos de Bariloche.

The naked minnow, unique species in the world The naked minnow is one of the unique species in the planet that inhabit in Somuncurá plateau and it can be seen from Sierra Grande.
To the Somuncurá Plateau Cave paintings, guanacos, rock formations and springs are part of the Natural Protected Area Somuncurá Plateau. A fascinating place for a photographic safari, to learn and explore.
See all Articles