The naked minnow, unique species in the world See map

The naked minnow, considered a vulnerable species, including in the 1988 Red Book pra International Union for Conservation of Nature (IUCN), the only fish native to the region under study. Is restricted to the headwaters of the stream Valcheta at the heart of the Somuncurá Plateau. 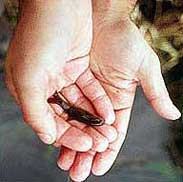 The minnow doesn't have scales.

The Naked Minnow was discovered early this century by  ichthyologist Fritz Steindachner, who uses the name of naked minnow because the specimens studied did not have scales. The scientific name of the species is Gymnoscharacinus Bergi, which belongs to the family of characin and includes all the cichlids.

One of its peculiarities, which gives the name, is completely lacking scales, although juveniles have them until about 42 mm. body length. Present species is composed of a few individuals, a few thousand, as natural and artificial factors threaten the preservation of the species.

Do not forget the factors outside the inevitable hand of man in excessive and unreasonable desire to capture this species for various purposes, sometimes scientists, sometimes only destructive. The Valcheta stream rises in Paraje Chipauquil (white earth), this is the place for the development of the naked minnow. 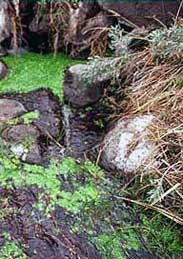 Beyond this place its survival is impossible, because it does not support captivity or water with a composition different from these. Because of this extraction is strictly prohibited and watching is encouraged, subject to the rules of preservation.

The naked minnow live in a paradise. Leaving Sierra Grande, must travel 75 kilometers to reach Paraje Chipauquil, located on the northern edge of the Somuncurá Plateau. There, several strands come join springs forming the stream Valcheta.

In small pools of Chipauquil springs can be seen shoals of these transparent fish. Some jump at the surface, no larger than 8 centimeters and appear to arise from the very center of the earth.

To the Somuncurá Plateau Cave paintings, guanacos, rock formations and springs are part of the Natural Protected Area Somuncurá Plateau. A fascinating place for a photographic safari, to learn and explore.
See all Articles