Allen is in the rich fruit area of the Upper Valley of Negro River, 25 kilometers from General Roca, 20 from Neuquén and 520 km from Viedma, the capital of Río Negro province. It currently has 25,000 inhabitants. 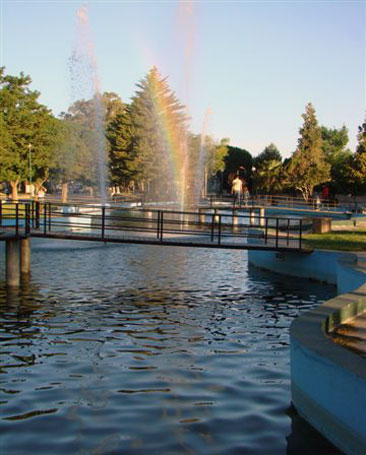 The fountain is situated on the tour of the city.

This town was founded just 100 years after the Revolution of May, on May 25, 1910 by Patricio Piñeiro Sorondo.

It was the time when the railroad began to arrive and the first fruit plantations began to increase, while other cities were consolidating related to these events, such as General Roca and Cipolletti.

The name comes from the engineer Charles Allen, whose efforts helped to build the railway station in the city. Allen owned land in the area and created the Baron of Río Negro Winery, which is not currently running but it is in the process of doing it again.

Currently, the main economic activity of the town is the fruit production. Each January, it pays tribute to the production and its people through the National Pear Festival. This event brings together hundreds of viistantes enjoying an exhibition of all phases of growing and harvesting of this fruit, as well as important regional and national level artist.

Those who come here or are passing through it can be make attractive activities like riding a bicycle, motorbike and walks through the fields or up the Negro River, where you can fish and sail.

Also in the city works the Concentrated Market of Fruits of the province.

National Pear Festival Each year Allen prepares itself to pay tribute to one of the main fruits of harvest and of course to the producers that are the heart of the productive machinery. This is the National Pear Festival.
Municipal Museum of Allen: a place to be visited Municipal Museum of Allen is one of the required places in the visit to the city as it is a site of important historical and cultural content of the city.
Flying Club of Allen Baptism flights, courses, short-haul flights and much more can be enjoyed at the Flying Club of Allen.
Tour of the Valley of Cicling in Allen Each November the City of Allen does one of the most important cycling test in the Upper Valley of Negro River. This is the Tour of the Valley, a competition that calls for hundreds of runners across the country.
Bubalcó, the valley's zoo 1Bubalcó is a project dedicated to the breeding and exhibition of species of native and exotic wildlife in the valley of Negro River. It is an area of ​​34 hectares located on the island 19 near the city of Allen.
See all Articles