Aluminé prepares itself every year for the Provincial Pehuén Festival filled with an extensive program of activities and entertainment. The 2011 edition of the festival was held from 21 to 24 April in conjunction with Easter, an ideal opportunity to explore the city. 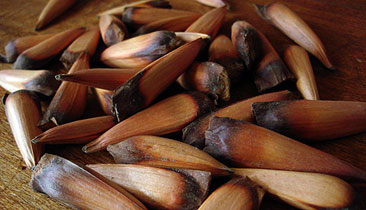 THe piñón is the fruit of the araucaria.

Like 20 years ago, Aluminé dresses up to celebrate the Pehuén a characteristic tree of the area along with the araucaria whose fruit, the piñón has it festival in late March in Caviahue to coincide with the start of its fall.

Pehuén is represented on the shield of the city, because of the importance it has for the local community. Local authorities estimate that each year the festival has an average of 3 000 visitors each day, competing in different parts of the province attracted by the various activities are performed. 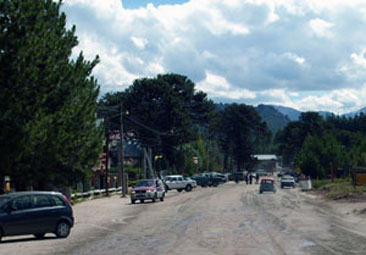 The streets of the city are sorrounded by pehuenes and araucarias.

Among these we find a documentary on pehuén, planting a pehuén that consists of just planting a seed of araucaria in "El MIrador" with the presence of authorities, and as in every festival in the Municipal Sports Centre can be seen a wide range of local, regional and national artists.

It is also made the choice of Pehuén Malen (Princess of pehuén) and Pichi Malen Pehuén (pehuén Little Princess), the traditional rodeo and native skills on the campus of The Bagual traditionalist center, and a parade of gaucho groups.

But without a doubt, the main number is done on Sunday when carrying out the Great Rodeo in two categories, "grupa surera" and "bastos con encimera",with the sum of $ 8500 in great prizes for the winners.

Finally, the agenda proposed Pehuén Marathon that has a total distance of 10 kilometers through the streets of the city.

Pehuenia: the land of the Araucaria Villa Pehuenia, Aluminé and Zapala are the major cities that make up the Pehuenia Region. There you can enjoy valleys, forests and lakes. Fishing and rafting are Among the highlights activities you can do.
Rock Paintings, a great heritage Rock paintings can be found in the province of Neuquén as part of the pre-Columbian artistic heritage of great cultural value.
Kayaking in Aluminé: feel the adrenaline Aluminé is an ideal place for kayaking and rafting in the Ruca Choroi river, privileged by its rapids and difficulties in navigation.
Sports and recreation in Aluminé In Aluminé you can enjoy different sports and recreational activities such as rafting, kayaking, fishing, horseback riding and trekking.
Tourists circuits from Aluminé You can travel three tourist circuits to explore the region. In most cases, you must have a vehicle to travel the large distances.
Fishing in Aluminé The Aluminé river and the lakes Ruca Choroi and Quillén are ideal for fishing in Patagonia.
River Festival in Aluminé In January Aluminé celebrated the River Festival in honor of the watercourse which gives its name to the town.
Bird watching in Aluminé Bird watching is one of the new activities that can be enjoyed in Aluminé. Spring is the best season for bird watching in this section of Patagonia.
See all Articles