Chimpay is inextricably linked to the figure of Ceferino Namuncura, the son of Rosario Burgos and the famous Araucanian cacique Manuel Namuncurá.

Chimpay Ceferino was born in the August 26, 1886. He was baptized two years later by the Salesian missionary Domingo Milanesio. After spending his childhood on the banks of Negro River, in 1897 he entered the College of San Fernando and then he was accepted at the Salesian College Pius IX, in Buenos Aires, where he confirmed his religious vocation. 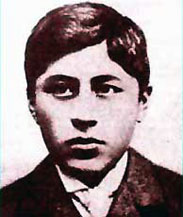 In 1904, Ceferino Namuncura, accompanied by Monsignor Antonio Cagliero, went to Italy, where he was received by Pope Pius X and then he continued his religious studies in Turin. His health did not survive the harsh winter and in late April Italian he was taken to Rome, where he died of tuberculosis.

His remains were repatriated in 1924 and rest in the chapel of Fortin Mercedes, south of the province of Buenos Aires. In 1945, started a cause of beatification, which was favorably considered by the Sacred Congregation of Rites.

He entered as apprenticed to a carpenter in the National Workshops of the Navy, in Tigre. He was very young, but felt the great need for living. His father came up to think that presidents can do good things and he wrote a letter to the then president, Luis Sáenz Peña, asking for his son. Saenz Peña went to the Salesian High which received Ceferino in the College of Artes y Oficiosts Street, today is Quintino Bocayuva, in the neighborhood of Almagro. They came the Patagonian Indian prepared to be educated to help his people.

Being with the Salesians, Ceferino had the opportunity to travel to Rome to visit Pope Pius X, who received him on September 26, 1904. Ceferino gave the pontiff a blanket of white chulengo skin. The interview was not granted immediately, but when he finally was able to meet the Pope, Ceferino was modest, humble and quiet. He then traveled to Florence and Bologna, but the bustle hastened his death. He must leave books, courses, Latin and cathedrals and, after spending 45 days in the hospital, he died on May 11, 1905, in the middle of spring in Europe.

According to Act N° 433 of September 10, 1967, the book of City Council meetings, with the presence of Gregorio Garodnik, Enrique Hernalz, Pedro Ferrari, Jose Alberto Perez and Benigno Prada, they decided to build a park reminder of Ceferino Namuncura close of the daown of "Paso Corto". So it begins a long journey of growth ideas and projects that give life to the real park where the devotees of the Lily of Patagonia meet every year.

Today Ceferino Namuncura Park, along the Negro River, is the meeting place for all the faithful who come to Chimpay to visit the blessed. The monument, which in itself reflects the simplicity of the little Indian, keeps his image in a wood carving by the sculptor of General Roca, Juan Sanchez. Also in 2009 it was opened the works of marble sculpture of another artist of Roca of enormous dimensions, 5 meters high. Both are emblematic of Chimpay.

Pilgrimage to Ceferino in Chimpay Chimpay prepares itself every last weekend of August for the annual event that attracts thousands of faithful across the country and the world. The pilgrims go there to renew their faith in the Blessed Ceferino Namuncurá.
See all Articles