Choele Choel has one of the most important festivals in Patagonia. There takes place the Provincial Calf Festival as a recognition of the livestock vaccine that predominates in the region. 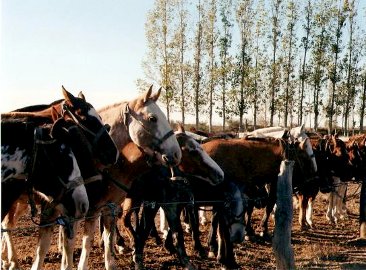 Hourses in the Calf Festival. Photo from Patagonia.com.ar photo album

Generation after generation revalue the rustic customs of the area and provide a spectacle for the thousands of visitors who come every year to the event. The party has gained importance at the provincial and national levels, with more than 25 years (since 1985), which make the locality within the estate, a producer has its own festival.

In its early years people outside the city were the organizers of the event, convened by the Rural Society and the commission of the Sportsman Club, but over the years took charge of organizing the Traditional Center Fuerte Avellaneda.

In every edition you can observe different Creole skills such as rodeo, "pialada", reins test, Cline and rump, of which important and recognized horsemen herds. A party with all the color, brightness and music. Rodeo, folk groups, dance, poetry and recitation of minstrels combine to offer the visitor a show of luxury.

Hugo Malaspina, president of the Traditionalist Center tells about the festival that it represents a traditional and cultural symbol, which is in the local calendar and the provinces of Buenos Aires and La Pampa and was declared of provincial interest in the Chamber Senators of the Nation.

Determined to demonstrate the countryside traditions that form the roots of Choele Choel, two residents of the city pushed for the creation of the Calf Festival. Alejandro Pividori and José Maria Puente with the Rural Society, gathered to recognize the city as a producer of cattle.

In that first edition was a shot of calves with nearly 1000 head also was a celebration with 3 herds and 30 horses on the grounds of the Rural Society. Truly a feast very small compared to what the festival is now, but paradoxically it was the party that brought more people coming to the 2400 visitors.

Los Alazanes island and the possibility of hunting wild boars On Los Alazanes island, near Choele Choel, you can go fishing for mackerel and perch but the highlight is the hunting of wild boars.
Middle Valley: endpoint to an exodus of 400 years From German and Orthodox to refugees from Laos and Creoles. Middle Valley area constitutes a real mixture of races.
Laos Refugees in the Middle Valley The Hmoobs in Middle Valley. Their arrival and establishment, despite having to endure being included within the group of "Laotionas" even if they were not.
See all Articles