In his human nature the man has always had a desire of conquest, of discovery, for better or for worse. Fortunately, Mother Nature got him in the way oceans, mountains and volcanoes. Here we present a new challenge for man: the highest mountain in Patagonia, volcano Domuyo. 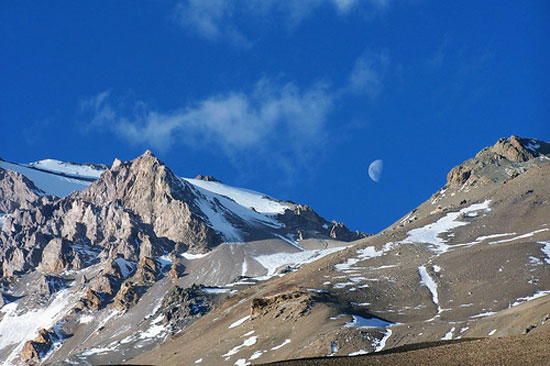 With its 4709 meters of altitude above sea level, the Domuyo is considered the highest mountain in Patagonia. It belongs to a protected area that is in the north of the province of Neuquén, in the Departments Minas and Chos Malal. From the city of Chos Malal, access is through the Provincial Routes 43 and 39. 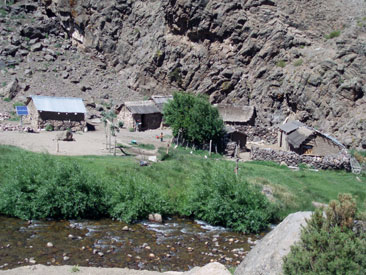 This colossus of land and rock, whose name comes from the Mapuche language meaning "that tremblies and grumbles", is part of the area known as the Cordillera del Viento, which runs parallel to the Andean chain, but in Argentina and lives up to its name by the winds that, every so often, they come to turn and destroy tents in the camps on the way to the summit.

Colonel Manuel J. Olascoaga was the first person to meet the challenge and conquer the summit in February 1882. Over a century later, the mountain equipment has evolved considerably in this activity, existing today a wide range of clothing and technical equipment suitable for mountain, including coping with extreme cold. 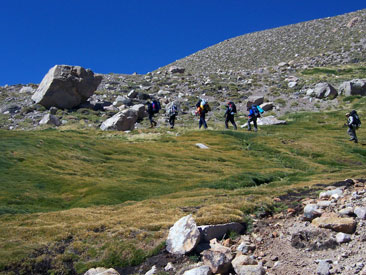 The crossing path to Domuyo.

The climate is temperate in summer and cold-dry in winter, the average annual temperature is around 11 °C, the annual rainfall are of 150 mm and the northwest winds blow more frequently in spring and summer.

Mountaineering is an activity that usually rise together people with an adventurous spirit but that are inexperienced mountaineers.

Anyone can do it as long as have experience in the mountains, otherwise you must be accompanied by an experienced person. You need to have knowledge of mountain and the right equipment.

Experts recommend that anyone who raises the possibility of climbing a mountain should begin as soon as possible with physical training preparing the body for the experience. It is generally advisable to work together with the aerobic endurance in your legs.

The road is full of surprises and strange formations.

People who can not control their instinct for conquest and want to make the expedition to Domuyo must do the following itinerary: 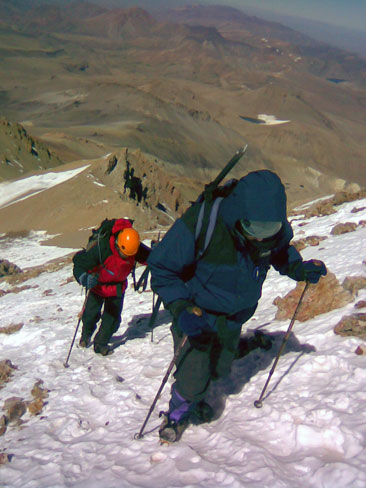 After seeing beautiful landscapes with different authentic mountain features, ravines, cliffs and even geysers from existing geothermal wells at the site, you reach the area known as El Playón at 44 kilometers from Varvarco.

The trek from El Playón to Las Lagunitas at 2,800 (m), the first camp, takes no less than 5 hours. Then you can camp at the 3,800 (meters) before reaching the summit. Slopes of 65 degrees as the one in the area known as ¨La Montura" about 4,100 (m) are part of the road that the trekkers should move on.

Finally you reach the desired peak to enjoy the Patagonian landscape and breathe the pure air of the mountains. On the way back you can make a few kilometers to the town Aguas Calientes where you can enjoy a relaxing thermal bath.

Conquer the Domuyo takes six full days of adrenaline, a reward for effort that has to conquer the highest peak in Patagonia, where few reach but those ones feel something more than conquer the summit. 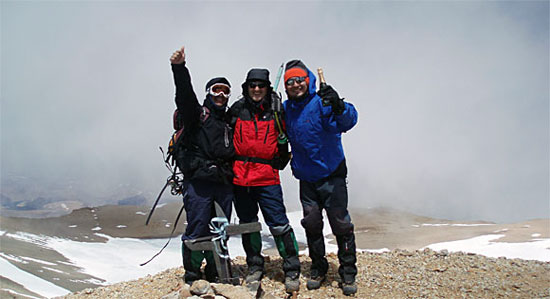 Celebratin at the Domuyo's summit.

Cerro Wayle, an ideal resort for beginners Cerro Wayle is located 48 km from Chos Malal. The hill has excellent slopes and all amenities to enjoy winter activities.
Nacional Chivito Festival 2The National Chivito, Dance and Song Festival is held every year in Chos Malal. There visitors can taste typical meals of Patagonia, and also enjoy the gauchos's parade, rodeo skills, jineteadas.
The North of Neuquen: an area to discover The North of Neuquén is a rugged and largely uninhabited place. Among the most important cities in this area are Chos Malal, Andacollo y Huinganco.
Gliding in a Mountain Wave In November Chos Malal receives important visitors from many countries as they participate in the "Meeting of Gliding in Mountain Wave."
See all Articles