A walk through the city of Cipolletti See map

Cipolletti is a city without much noise. There are many places to visit, some historical, others purely recreational to share an evening out with friends. 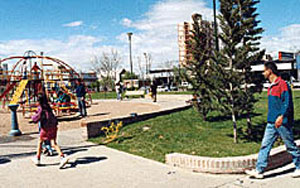 Located in Roca Street, between Sarmiento and Italy, with 5000 square meters, it has an amphitheater, a playground, a waterfall and a sports place. The landscaping at various levels gives a refreshing touch to this place that occupies an entire block, except for School 53 that is in the midst of this privileged area.

Lots of people pass this place in search of recreation, relaxation and even shelter from the sun during the hot summers of this region. Perhaps because of its name or because it is a tempting place, has become the meeting point for families, where younger children play and have fun while parents enjoy a good rest.

With stone washed sidewalks and fully illuminated by streetlights, the Family Park is also an ideal place for the night, where it is common to see groups of young people around the "mate" and neighbors of all ages willing to have a good time.

House of Music and Cultural Center

In the House of Music currently operates the Cultural Department of the municipality. The place is suitable for all types of events and is the space that brings together artists in this branch. Periodically is carried out in this place the Meeting of Cultural Directors of Río Negro and Neuquén, which is circumscribed to the area between Allen and Plottier. The intent of this meeting is to articulate guidelines for working together to make a better integration of the two provinces.

House of Music in Fernández Oro and Brentana.

The Cultural Center, located at Avenida Toschi and Tres Arroyos is a new building, inaugurated in March 1998, which was designed to accommodate all the cultural and artistic expressions of the city.

With almost 500 square meters covered and dependencies, has a large function room with capacity for 400 people and have parabolic roof providing proper acoustics. Then there are the dressing rooms, access, management, office and warehouses.

Here are combined samples of visual artists, musicals, plays, choirs, dance groups, bands and all the artistic expressions of the city, coupled with the neighboring towns that found here an appropriate place to express themselves.

Comprehensive Center for the Elderly

This center is unique in its kind in the country. With contributions from the Municipality and National Social Development was created this space for the development of over 50 seniors. Different activities are provided to the elderly as recreation, food, literacy and counseling for pension issues, articulating a close relationship with the PAMI.

The Comprehensive Center for the Elderly was opened on October 3, 1997, coinciding with the anniversary of the city of Cipolletti. Most grandparents who attend are, for the most disadvantaged and are brought there by the transit authority covering the area of ​​farms and several neighborhoods.

The seniors can choose from music workshops, crafts, weaving, painting and many others. Some days there are also hiking and outdoor activities.

Located in Irigoyen and Presidente Perón Beltway, this magnificent building was the home of Alberto Peuser, and had bring together leading personalities who were friends of the owner such as: Lisandro de la Torre, Rubén Darío, Ricardo Rojas, Rubén de Castellanos José Guerrico.

The manager of this house made in the image of Petit Trianón de María Antonieta and is surrounded by a lush park with old tree species as the very construction years. According to data collected, the presence of Alberto Peuser in the area dates back to around 1911, when he was invited by the pioneer Manuel Cordiviola.

As the only research work on the house conducted by professors María Ildegonda Pan de Benzadón and Liliana Fedelli de Carro, then finalize the acquisition, Peuser proceeded immediately to the pairing of land irrigated by canal Lucinda, occupying 100 people for the work.

Peuser was a man connected with the local orchards, but was primarily interested in transferring these lands its intense social life of Buenos Aires. The materials of the house were purchased in Bahía Blanca and almost entirely imported.

Remarkably for the time in question, the house had central heating, four bedrooms, hall of mirrors, three bathrooms, a kitchen, service bedroom and a laboratory for developing photographs.

The historic rescue of the mansion remembered as a place where lavish parties were held, meetings in the busy social life of Prasuer and friendships. The historical value of this house is invaluable to the city of Cipolletti, since it represents one of the few buildings of its kind left in the city.

The night on the town

For those who like the night, in Cipolletti can find a measure alternative measure. A few kilometers from the city on National Route No. 22 some meters from the toll booths that communicate with the province of Neuquén, there are two nightclubs that offer a place for every age and activity for every style.

On one side is the casino opened in February 1996, is an imposing modern building with great comfort to spend an evening with friends or challenge your luck. In the same musical shows are offered all weekend and the restaurant is a great prelude to try your luck at roulette.

A few meters away lies another multi-space complex but with different characteristics, in which all are bound to enjoy regardless of age or musical taste. You can also eat a snack or enjoy a show.

It is a complex of more than two thousand square meters with a capacity of four thousand people, the largest in the entire Upper Valley. The intention is for all ages to find a place to enjoy the night and where the combination of activities and recreational offerings is the main goal.

The circuit of the south bank of Negro River From Cipolletti you can start a tour by the south bank of the rivers Limay and Negro. A tourist corridor with landscapes ranging from river oasis to semi-desert land, where you can see paleontological remains and cave paintings.
Jordán island in Cipolletti Jordán Island, located along the Negro River, is the resort par excellence of Cipolletti. Locals and visitors come when the heat gets worse in summer.
Cretaceous Park Tourist Corridor from Cipolletti A trip to the past. Remnants of the valley when the area was a rain forest and it was toured by dinosaurs millions of years ago. You can find remains of dinosaurs and see petrified logs.
Las Perlas in Cipolletti Rincón Las Perlas is a population of about 800 people that is part of the municipality of Cipolletti.
Playaventura, a place to spend your vacation In Cipolletti there is Playaventura, a place with campsite for families or friends where you can horseback riding, fishing, rappelling, climbing. There are also pools and games for kids.
Carlos Ameghino Provincial Museum Cipolletti offers a way to explore the wildlife that inhabited the area of the valley for thousands of years, the Carlos Ameghino Provincial Museum.
See all Articles