The museum of Lamarque is very important at paleontological level, thus its group of workers has made very important findings and one of his pieces was exhibited in a museum in Germany. 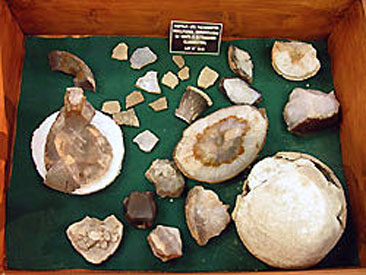 The paleontological museum began as a project of a group of residents 20 years ago, who had the intention of creating an open space to the community. Most members of this group were people interested in paleontology.

Today the museum houses an important collection of fossils and in its heritage it has a collection of marine fossils dating back more than 90 million years, the remains of dinosaurs herbivores, carnivores, as well as fossil wood and fruits.

The museum staff has made discoveries of unknown species, thanks to what it began to have greater public importance. These fossils began to be investigated by a specialized team from the Museum of La Plata that describe them and place them in context of paleontology in Argentina and worldwide.

Patagonia is an area where there have been several paleontological findings which can be seen in museums in the region, thus confirming the diversity and value of the deposits. Also, the tour of the museum is a tourist attraction that offers the possibility to know the riches of Patagonia. 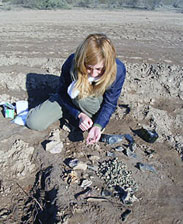 Findings in the area.

In this sense, the museum is responsible for providing excursions including the towns of Lamarque and the town of Bajo Santa Rosa in the province of Río Negro.

The recommended months for field trips are: from September 15 to December 15 and from February 15 to May 15. The service includes the transfer of visitors from the town of Lamarque to the fields and back, plus snacks.

The base camp is located in the "El Matuasto" field at 110 km from the city of Lamarque. To get there, go along 15,000 hectares of gravel roads where the predominant landscape is the Patagonian plateau, with sightings of different species of flora and fauna.

You visit the "Quebrada del tamarisco", where you can observe the remains of an aboriginal settlement, with rich flakes and tools used by them. Among the activities that are planned you find walks and location of different layers from different ages and geological formations and their fossils.

In addition to observing the KP line (border between the Cretaceous and Tertiary) precise geologic time when the great extinction of dinosaurs occured, because of the fall of several meteorites; you can visit the Tortugas Hill. There it were made findings of mammals, boas, reptiles, fish, birds, etc., all fossils belogging to the Cretaceous (80 million years) and the petrified forest with deposits of dinosaur eggs. 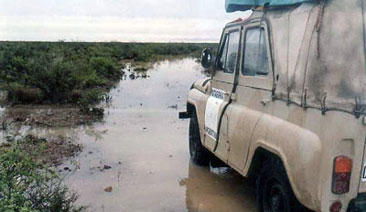 On the way to the camp to begin the excursion.

In Bajo Santa Rosa you can interact with former residents of the area and observe the living conditions in the arid Patagonian lands.

Finally you make a guided visit to the Paleontological Museum of Lamarque and evaluate the fossil material collected on the expedition by an expert.

In 2009 the museum participated in a tour of Europe with one of its specimens in the Mega Exhibition "Dinosaurs - Giants of Argentina", which was initially 6 months exhibition in Lokschuppen Museum of the city of Rosenheim in Germany. Lamarque Museum provided a replica of one of the latest and most spectacular carnivorous dinosaurs discovered in the South American continent, the "Austroraptor Cabazai".

National Tomato and Production Festival in Lamarque Lamarque celebrates each March the National Tomato and Production Festival honoring the producer of that crop, main economic activity of the locality.
International Fried Cake Festival Each year in the town of Lamarque people gather for a celebration with lots of flavor. To weave the different ethnics and cultures of the city it is held the International Fried Cake Festival, so as to expose the customs of each region.
See all Articles