From Las Lajas, taking Provincial Route 21 and after crossing the streams Haichol, Codihue, Huarenchenque and Yumu Yumu it is the town of Loncopué, name from the Mapuche language meaning "lonco" (head) and "pue" (chief), i.e. "head chief". 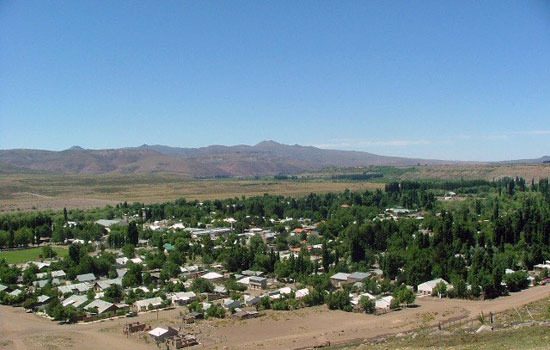 City Loncopué is seen as a green valley in the Andean foothills.


In Loncopué, head of the Department of the same name, highlights the important livestock production (mainly vaccines, but there is also an interesting goat production), which since 2006 has its own Livestock Show and Traditional Festival to showcase the different races and genetic advances in this economic activity.

Loncopué City, located 304 kilometers from Neuquén capital city, tries to put before the provincial eyes as the largest beef basin in the area, to contribute with cultural and tourist attractions for a better economic development and to strengthen the local cultural roots.

Additionally, the city is characterized by being the main service center of Copahue Thermal Complex and by the different places that you can go from there, surrounded by landscapes characterized by gentle slopes and areas of attenuated hills to north and east, while at western of the Andes, the sets of pine and streams provide a unique and special frame.

Among the places you can visit are the "Altas Torres", a natural set of eight cylindrical columns eroded by wind and arranged in a circular shape to the banks of Agrio river.

The "Riscos Bayos" is a farm of 1380 hectares with curious rock formations located on its premises, product of volcanic ash deposited in the Tertiary era, and then compacted by glaciers and eroded by wind.

There is also farm "Las Tres Marias" over the mountain valley and bordered by the Agrio river and Yumu Yumu stream, and other sites like Chenque Pehuén, the Agrio river, Hualcupén stream, La Parva hill and the Almaza ravine.

During Saturdays and Sundays, a craft fair is held here which fabrics, farm and garden products are sold.

Loncopué lives its Festival enthusiastically The Livestock Show and Traditional Festival is a cultural event that attracts thousands of people every year in Loocopué. Animal exhibits, a folk festival and many more seasonings put color to this popular festival.
See all Articles