The town of Luis Beltrán, who belongs to the Middle Valley of Negro River in Patagonia, held every year the Provincial Irrigation Channels Festival in honor of one of the main resources of the region: the irrigation of the farms, financial support of valley. 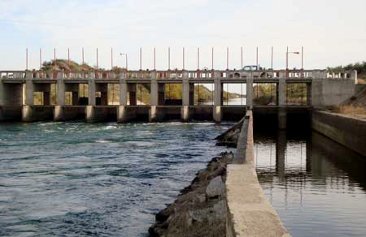 View of the gates of the irrigation channels. Photo courtesy of NoticiasValleMedio.

For three days in the month of September a luxury party is lived with around 8000 spectators.

The idea stems from the need to publicize and evaluate the irrigation system of the Negro River Valley, which represents the work of the first settlers, who transformed the region into an area of ​​agricultural production. In addition, the event tries to create community awareness of the importance of water resources and their rational use.

This will involve explanatory talks, agribusiness exhibitions, conferences, a folk rock, shows by regional and national level artists, among many other activities. Provincial and municipal authorities, workers and families of Water and Power, local and regional artisans, students, farmers, residents of the town and surrounding villages come together each year to celebrate in Luis Beltran.

The first edition of the festival took place on September 24, 25 and 26, 2010. At that time stood out, besides the traditional activities, a model made by students in Water Resources Technical Programs that showed the current irrigation system in Choele Choel Island and a tour of "The Way of Water", the intake and other works of the irrigation system. The start of the holiday coincided with the commemoration of the Start of the first gate, which is now known as the "Canal de los Galeses".