The city of Maquinchao celebrates each February the Provincial Wool Festival as a tribute to the livestock that prevails there. A great show with regional and national artists, a large equestrian festival, contests to select the best animals and fireworks to close. 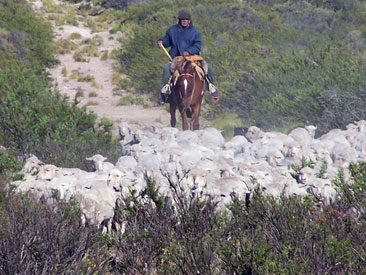 The event is one of the most anticipated in the South Line of Río Negro, as hundreds of participants of the entire region and the province attend to the grounds of the local Rural Society to show and compete with their best specimens. Once there, a demanding admission jury assesses that all meet the necessary requirements.

The VIII edition of the Festival was held between February 25 to 27, 2011 and had as its central issues the La Banda al Rojo Vivo which closed on Friday 25 and Rubén Patagonia, who did the same on Saturday 26. Furthermore, local and regional artist presented in the scenario each night of the festival, as the mood of the "Turco Ayamé", the election of the new Queen of the Wool took place and there was a grand popular ball.

In the grounds of the festival you can tour the booths of artisans and balloons of different supporting and participating institutions, as well as street vendors.

But without doubt, what most attracts the attention of all visitors are the more than a hundred pens with sheep specimens that participate in the competition for the Grand Champions. This ability to display the animals in society allows farmers to buy and sell to further improve their pasture.

On the other hand, as it has been happening since 2008, the festival coincides with the Livestock Exposition of the Southern Region, which involved different cabins of the Patagonian provinces.