The town of Puerto San Julian invites you to visit the various attractions that make it an interesting and compelling place to explore and enjoy a pleasant stay.

To begin the proposal is the Coastal Circuit, in which you will appreciate a variety of beaches serviceable by big cliffs over a distance of 30 km through a landscape of unique beauty.

One of the best ways to get to know all these beaches, including beach Sholl, of the Caracoles, Cabo Curioso, the beaches of Drake, the Garganta del Diablo and beach La Mina, it is a mini-trekking coast of two hours. On this tour you can enjoy the view of the bay San Julian, the varied Patagonian bird life and the geological history of the land seen in the cliffs.

Another option for the bay is the practice of water sports such as canoeing, windsurfing and sailing through the magnificent water formed. Or fishing in a coastline of 50 kilometers with a lot of species such as sea bass, silverside, dogfish, elephant fish and the mighty shark Leopard, that every year convenes in January dozens of participants for the shark fishing contest. 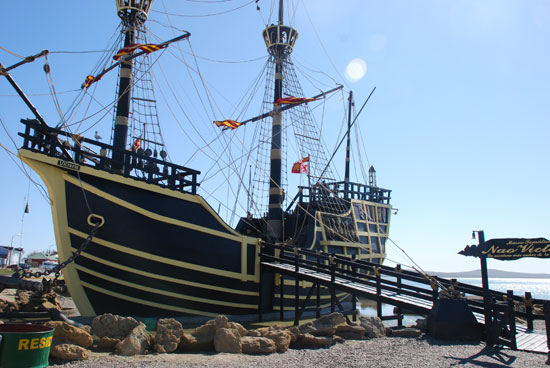 
Within the city we can find the Nao Victoria Theme Museum which is a real-scale replica of the ship, which anchored on March 31, 1520 in San Julián with Magellan's fleet. In the same is recreated every aspect of the ship and is suggested that visitors can experience the story of the novel sequence of events occurring in the legendary Bay of San Julian.

To accomplish this experiment it is used an advanced surround sound technology that recreates the atmosphere of the time, and there have been reproductions of everyday objects, navigational instruments, artillery and figures of some of the characters in the Magellanic Navy.

The Florida Blanca Archaeological Sample that can be seen in the Regional Museum Rosa Novak of the town is another alternative. It is exposed in different panels and displays that tell the story of the colonization project of Fort Florida Blanca by King Carlos III in Puerto San Julian, part of the daily life of ancient inhabitants of the colony and also from the hunters gatherers 13,000 years ago.

The Fuoco Sacro ¨Via Lucis" Theme Park (or Way of Light) is a journey through fourteen stations which celebrates the resurrection of Jesus Christ, the encounter with the apostles and ascension into heaven. 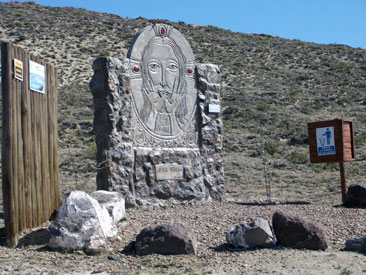 The Via Lucis has plaques in Braille information for each station for blind people.

The Regional and Marine Museum was created in 1972 to preserve and exhibit the heritage of the city and its surroundings through archaeological and anthropological petrified pieces, objects that belonged to old residents of the area, an art gallery and an exhibition of sculptures.

And in the Craft Centre are exposed works in ceramic with a mass production process, with handmade molds. They also make pots around, stand hand pieces that are decorated with slips, earth colors of the area and sgraffito techniques with designs of animals in the area or ancient Indian designs.

Finally, going away about 150 km northwest of Puerto San Julián you will find the Archaeological Deposit La María, in the farm of the same name, in a extra-Andean Patagonian typical lanscape over vast plateaus which gradually descend to the sea, with a vegetation dominated by sparse, woody shrubs, grasses and cacti.

In addition La María landscape reveals the incredible geological revolutions that shook the Patagonia in the past, observing sediment consisting of rocky outcrops of volcanic explosions that have shaped cliffs with many caves, shelters and eaves of very different sizes.

That was the place chosen by the prehistoric inhabitants for refuge and leave a testimony of incredible cultural value. Until now, it have been found a total of 84 caves and eaves that have rock art of up to 12,600 years old, where the most important is the high colors of their paintings, the rich abstraction and symbolism of the motifs represented.

The natural richness of the bay of San Julián The great diversity of species on the coast makes of Puerto San Julian a site with great potential for tourism as few places in the province have. There it was created the Natural Reserve of San Julián Peninsula on the eastern shore of the bay, 25 km from the city.
Nautical Excursions in Puerto San Julián From Puerto San Julián you can take a ride in small boats from which you will see species of Patagonian seabirds and know some of the world's best corners as the penguin colony.
See all Articles