From Puerto San Julian you can take a ride in small boats from which you will see species of Patagonian seabirds and know some of the world's best corners as the penguin colony. 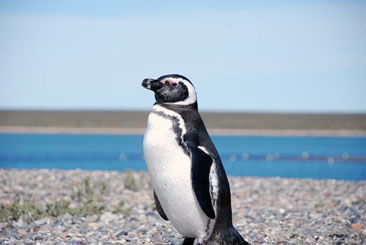 Magellanic penguins can be seen from a short ride.

The nautical excursion takes place in a semi-rigid with a capacity for 10 people and a minimum of 4 that lasts 2 hours. It starts from the dock to the islets Cormoran Bank, de los Pinguinos Island and Justicia Bank.

Accompanied by an expert guide in both biology and languages, you know the history and characteristics of each species of flora and fauna that are sighted in the excursion.

The tour begins at the old pier. As the boat enters the waters, you start to see the Commerson's dolphins, a variety of dolphin that is the smallest and are colored black and white. 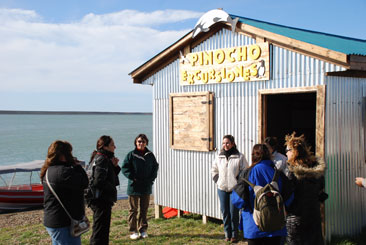 Tourists get ready for the trip.

Arriving in the Cormorán Island you can see some of the 130,000 specimens of Magellanic penguins, Spheniscus magellanicus, who live in the region according to the 1993 census conducted by the Fundación Patagonia Natural.

Each year between September and April, the penguins come to the island to lay their eggs and to build the new baby. Penguins are considered friendly, allowing visitors to see them up close, always taking the necessary precautions to avoid disturbing or harming the species.

Another place to visit is the Justicia Bank (Guano Island), where shags and rockers cormorants nest. Besides you can see the kelp and the southern gull, South American terns, skuas, Antarctic pigeon, oystercatcher, heron and maca, and occasionally the gray cormorant, the biguá and giant petrels. 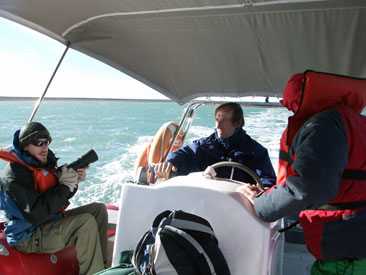 In one of the boats.

The story goes that Justicia island is the tomb of two captains executed by Magellan in 1520 and of another beheaded by Drake in 1578. This and other stories are those told on board, plus a brief history of San Julian.

We recommend on taking the boat, warm and comfortable clothing, binoculars and digital camera batteries charged because you will not stop to photograph the entire trip.

Places to visit in San Julián The town of Puerto San Julian invites you to visit the various attractions that make it an interesting and compelling place to explore and enjoy a pleasant stay.
The natural richness of the bay of San Julián The great diversity of species on the coast makes of Puerto San Julian a site with great potential for tourism as few places in the province have. There it was created the Natural Reserve of San Julián Peninsula on the eastern shore of the bay, 25 km from the city.
See all Articles