Villa Regina is one of the most important in the production of vine, with lots of acres in production. 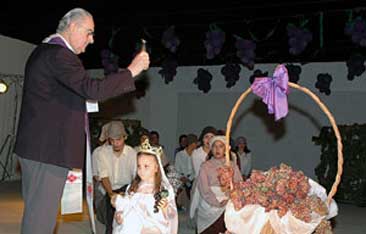 Blessing of the fruit.

That is why in March make honor to the producers who work daily with the grape and wine makers of Patagonia with the Provincial Vintage Festival. It's a festival that every year grows and increases in offers Villa Regina as one of the most important grape production and wine production in the Patagonian region.

The festival begins with the blessing of fruit and then performs the traditional parade of floats through the city. Then, as in all popular event, can not miss the musical shows at the hands of national and regional artists, a Craft and Commercial Fair which offer tastings, choosing the queen of vintage and a luxury closing with fireworks show over the fence north, near the monument to the Indian Comahue.

The Organizing Committee of the Provincial Vintage Festival since 2009, proposed the election of Miss Uvita, designed for girls of Villa Regina and surrounding towns over 5 years.

As part of the festival is performed Vintage Triathlon, which begins on Sunday following the end of the event on the Island 58 vs. boating school. The course consists of 1 kilometer swim in the Negro River, 20 km Mountain Bike and 6 kilometers hiking.