Trekking to the Indian Comahue in Regina See map

A particular race in its form, as is done in pairs and because of its destination as this is a very distinctive local landmark: Indian Comahue. 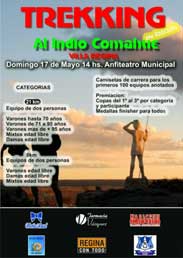 Poster of the 2009 competition.

Since 2004 is carried on the trekking to Indian Comahue, a competition for the men and women of all ages, which is divided into two goals: one 21 kilometers and another 8.

One of the most traditional competitions in the region and its importance has become part of the calendar for athletes around the country.

The trekking to Indian Comahue is run in two-person teams. The challenge is to reach the Indian in ways that vary stepper. Competitors will encounter decreases, chopped, canyons and trails in the ways of plateau they should go.

The Indian Comahue is an imposing monument located in the city of Villa Regina. It can be seen from far away with a height of 30 meters.

For the people of the region means a tribute to the first inhabitants of these lands. This monument represents the goal of the athletes should come to him climbing the fence (plateau) on which it is located.

Both the route of 21 kilometers, such as the one of 8 are marked with red ribbons and competitors are assisted by checkpoints with hydration.

The prizes are cups and medals finisher, as well as racing T-shirts for the first 200 teams scored. At stake is the Challenger Cup in a replica of the Indian made with pottery with a wood base of 1 meter high that get the overall winning team that gets the top two consecutive editions and / or 3 staggered.