In the editorial office of www.patagonia.com.ar raised the idea of ​​talking about Rock Art in Colo Michi Có, one of the sites of major archaeological wealth of America and that hides unused accounts and numerous deposits of art. 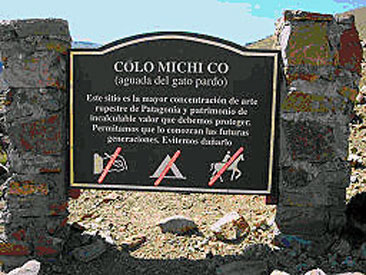 It was difficult to unravel Colo Michi Có key issues such as: location, directions, what is in place, in short, hard facts.

The reason is that the site is undeveloped touristically. In fact there is an investigation and a project to form an Archaeological Park, but for now there is a guide that leads the tour.

On the other hand, there are conflicting views regarding the damages to massive disclose the place. The truth is that the site exists and it can be studied and visited, always, of course, given that they are elements that should be care for and preserve.

Colo Michi Có is located in the Department Mines, in Neuquén Province, northwestern Argentine Patagonia, on the so called Cordillera del Viento, among Butalón and Varvarco. As a geographic reference it may be mentioned that it is near the towns of Las Ovejas, Huinganco and Andacollo and near rivers Butalon, Colomichicó and Neuquén. The site is located 2000 meters above sea level, by a rising path from the place of Don Pedro Vázquez Soto, the last position before coming to the site. 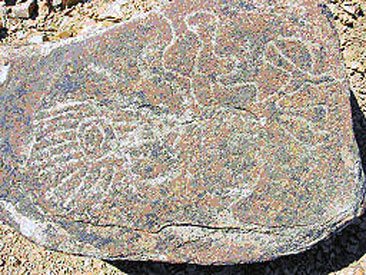 The guide that accompany those interested in the site is called Patricio Aguilera. He lives in Colo Michi Có where there is no mobile signal or landline, so Varvarco Tourist Office contacts him through the radio. The only phone number of the town of Varvarco is (02948) 421329. Similarly, the guide works in the town of Las Ovejas on Thursdays, where he made a radio program called "Escenario campesino" from 11 to 13 pm, and the number of the radio is (02948) 481001 or the cel phone (02942) 15695919.

In Mines Department of the province of Neuquén there is a concentration of rock art sites that can not be beaten. Example of this is Colo Michi Có is that it is surrounded by 23 other art sites arranged in an area of ​​relative proximity.

Colo Michi Có is a vast field in which there are 600 rocks with drawings, scientifically called "petroglyphs", typical of prehistoric or primitive peoples.

These rocks are fully and partially recorded, are grayish, with a weight ranging from 50 kilos to 1 ton. The print motifs are varied, they have forms of lines, signs, dots, diamonds, circles, etc, that some take primitive humanoid and zoological shapes that resemble frogs or spiders in geometric patterns, to arrowheads, serpentorides figures, fish skeleton, among others. The technique used to make the drawings seems to have been the percussion or chisel cut of flint or quartz and it has apparently been the same technique for all blocks. 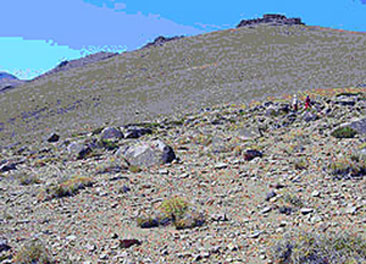 Locals refer to them as "work, labor, marked" stones. And it is because they are living around an imposing landscape of rock art.

Colo Michi Có has two meanings: one is "red under water" and other "deep stream of the cat". The first is due to a translation that is Colo=red, reddish, Michi=below, hidden and Có=water, stream. The other possibility is because Colo is the mythical legend of the wild cat (Colocolo), and therefore the meaning of the deep stream of the cat, as well as it is nearby the Crusade of the Cat on the Cordillera del Viento.

It is believed that the petroglyphs were made by nomadic tribes before the Pehuenches and that they left those marks on various parts of the north of the province. Among them we can mention: El Chacay, Chaquiras in Las Lagunas de Epulafquen, Butalon Norte, Gate of the Flores Ravine, Casa de Piedra, Chenques Ravine, Piedra Pintada Curi Leuvú, Blanco Stream, El Boleadero, among others. On the Chilean side there are very similar places and in large quantities in the Linares area.

National Comahue University conducted a research in 2004 with the aim of a project towards the creation of the Colo Michi Có Archaeological Park.

The initiative arises from the need to "bring together government bodies with the interests and needs of different communities" and otherwise to "tend to the conservation and preservation of archaeological heritage and sustainable tourism development thereof. This implies a comprehensive plan for managing the rock art site and its area of ​​influence, including the study of administrative, environmental and economic features, the latter in relation to the development of nearby towns who have the responsibility to be custodians of preservation and conservation of the sites".

This type of site suffers from the phenomenon of predation and degradation due to, among other things, the uncontrolled and unmanaged tourism phenomenon. That is why there have been initiatives such as the one from the university for the conservation and awareness for the care and preservation of the site.

Colo Michi Có. In the background, in the center, it is the volcano Domuyo.

In a first stage of the study it was defined to investigate the significance and administrative context for the reception of visitors. Among these, lithology studies have been conducted (part of geology that studies rocks, its grain size of the particles and their physical and chemical characteristics) to determine if the blocks where there are the petroglyphs are native to area or have been transported, and in the latter to determine the possible area of ​​origin and form of transport, whether natural or human.

Recognition and geologic reconstruction showed that the blocks are allochthonous, this means that originate in a different place that they are. And that they were moved by a natural process, probably a tank falling blocks on a hillside. These blocks are the foundation of the prints that over time have been deteriorating due to many factors, including meteorological factors such as the "night cooling, daytime heating, combined with freezing and thawing that produce processes of material dilation and contraction leading to the breaking and generating what is called exfoliation". Other causes have been the animals and plants that accelerate the deterioration of rock art and the actions of vandalism by people. Finally, in the university research is mentioned a factor that could provide evidence of the legend that circulates among the locals, because people have seen blown blocks and impact marks with sharp hard objects, made by gold prospectors.

The timing of the discovery of the blocks is an unusual fact that requires a separate paragraph.

The arrangement of rocks and strange forms gave rise to the legend about the existence of an underground city where they still live the descendants of the Incas, refuge there to escape the Spanish invasion of Peru. 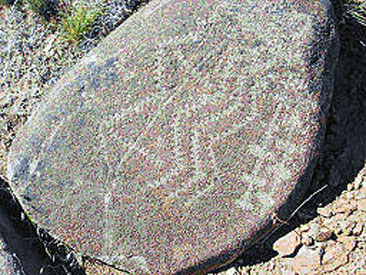 Another block that can be seen at the site.

The legend says that an Hungarian miner named Bela Veiko, who worked in the mines of Andacollo, decided to ignore what, to him, it was not a legend and set out to find gold. First he came upon a flat stone with a picture on a ladder and next to another rock with an arrow. Intuitively, he interpreted the marks were a direction to follow and he did so until he ran into two large upright stones with a third over, as a door frame. There he found another flat stone, but this time with an arrow to the foot of the rocks. In his mind, fevered by gold, it was made the idea that there was the entrance to an underground city that hid the fabulous treasure of the Incas. It was so that he wanted to find the entrance to the underworld even using dynamite. He only managed to do great damage in the engraved stones, and then he wandered through the hills a little crazy, with a pendulum in his hand, convinced that there was the entrance to the treasure of the Incas.

Thus Robledo Bruzzone, the principal of a school in Tricao Malal, and the historian Gregorio Alvarez decided to go to the site to verify the finding, from which arise the first mentions of rock art in the Mines Department dating back to the decade of 50s.

From Neuquén by National Route 22 to Zapala, then Route 40 to Chos Malal and finally Provincial Route 43 to Andacollo.

From Andacollo, head of the Mines Department, you can access by Provincial Route 39 of land or natural, passing the town of Huingan Co. Distance: 38 km, it can only be done in 4x4 or high vehicle.

Another route, longer route but with more consolidated gravel, is from Andacollo by Provincial Route 43 to the town of Varvarco, distant 50 km, and from there take the Provincial Route 39. After 15 km you reach a Butalón with a better stretch than the above.

Veranador Festival 1Since 1994 it takes place in Andacollo the Veranador Festival, a feast with folk performances, gaucho parade, rodeo and native skills.
Touring Andacollo city Andacollo City proposes a series of tours that take you to explore every corner of the city and its surroundings, where you will learn its geography, flora, fauna and history.
Andacollo: ideal starting point Andacollo offers several tours to enjoy its natural attractions, among them are included the mining, forestry, fishing, history and culture, spas, climbing, lakes, veranadas and festivals.
See all Articles