Andacollo is the gateway to a myriad of natural and tourist attractions that show the activity in the region and its scenic attributes. Among the tours that start and end at the city are included the mining, forestry, fishing, history and culture, spas, climbing, lakes, veranadas and festivals.

In this time you will visit the attractions of the city and surrounding Andacollo, towards Huingan-Có, 6 km away. Among the sights to visit are the Cañada Molina, the viewpoints of San Pedro Hill and La Cruz Hill, the Mining Museum, the amphitheater, "El Manzano" forest, La Corona Hill, the Nursery "Huinganco" Tree and Wood Museum, the Municipal factory of regional candies, and the Cabin of the Artisans.

This tour takes you to the roof of Patagonia, as it is known the Domuyo volcano for its 4709 meters, being the highest in the province of Neuquén. The same is located on the Cordillera del Viento at 79 km from Andacollo along the Provincial Route 43.

Here we can appreciate this volcanic formation, which has issued numerous lava eroding its structure, and you will see the hot springs that have boiling points such as: the Olletas, the Abrumadora, the Humazo and the Tachos, all in the east of the volcano, which in turn are surrounded by others of lower temperature. 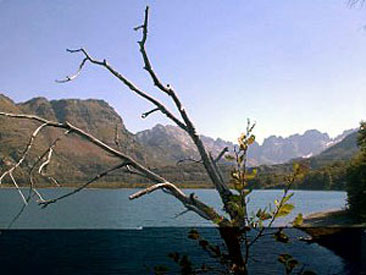 Here you observe some curious reddish rock formations due to erosion by wind and water, by wind and rain respectively. Among them is a group called "Los Monjes" for its contrasts of red and yellow colors with the  Varvarco River Gulley, which give a magical feeling to the place.

Finally, the city offers you to leave Andacollo along Provincial Route 43, join with Provincial Route 45 along the Nahueve river and perform 30 km to Las Lagunas de Epulafquen, whose name in the original language, the Mapuche, means "Two Lakes".

This site of 7,500 hectares, was declared a provincial protected area in the year 1973. The aim of its creation was the Andean Patagonian forest conservation which has the presence of species such as prellín oak, ñire and beech and rock formations of volcanic and pyroclastic origin of the Tertiary era inferior to medium.

The place is ideal for wild camping, hiking, photo safaris or enjoy the tranquility of the landscape. You can also go sport fishing and find brook trout, perch and catfish specimen.

Veranador Festival 1Since 1994 it takes place in Andacollo the Veranador Festival, a feast with folk performances, gaucho parade, rodeo and native skills.
Rock Art in Neuquén, Colo Michi Có Near the city of Andacollo it is Colo Michi Có, one of the sites of major archaeological wealth of America.
Touring Andacollo city Andacollo City proposes a series of tours that take you to explore every corner of the city and its surroundings, where you will learn its geography, flora, fauna and history.
See all Articles