In the town of Caleta Olivia is a colony of between 300 and 600 sea lions of one hair 10 kilometers from the central town on the Gulf San Jorge to the south.

"La Caleta" was declared Municipal Nature Reserve in 2008 by Law No. 3028/08. The place has a large number of sea lions and seabirds, including gulls and cormorants. In addition, you can see on the rocks (restinga) during low tide samples of mussels, snails, starfish and sea urchins. 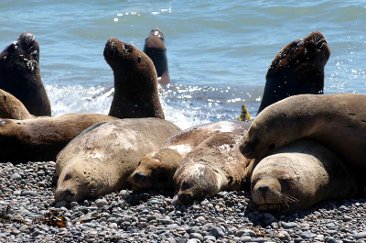 Sea lions in the coast of "la caleta".

Sea lions were declared Natural Monument of the City, in order to protect this species that is endangered. These animals, also known as sea lions by his mane around the neck, are pinnipeds (fin-shaped feet) belonging to the group of seals.

Its main physical characteristics we can highlight their conical body, strong head, short muzzle and raised large whiskers (bidrizas) and a ferocious teeth. Their front and hind difficult for them to walk on land but are ideal for swimming. Sea lions can live 35 years, feeding on fish, squid and penguins. Its hair color varies from dark to light brown. Meet other lion colonies in Patagonia.

How to get to the "la caleta"?

To reach the colony should travel 10 kilometers along National Route No. 3 to the junction with the old Route 3. Once in the intersection, from there must travel on the old route and folded along the gravel path that leads to the cliff to the beach. From that site you can see the wildlife that inhabits the coast of the beach.

In La Caleta is signage about the species found there. Also, as part of project development and preservation of the colony, there were works that facilitate the care and use of tourist and educational resource.

It is recommended that all visitors maintain a safe distance and make the observation from that cliff.