Chimpay: home of the Saint of Patagonia See map

Chimpay is a small village with about 8,000 inhabitants located on the side of National Route 22 in the Middle Valley of the Negro River. 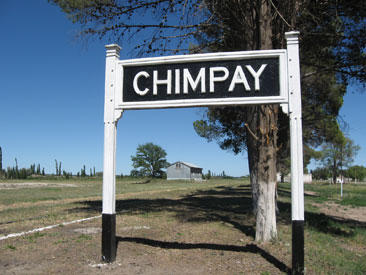 Its agricultural production is almost the basis of its livelihoods, and for most of the year, its streets have almost no movement. But in late August, hundreds of people of all ages come and disturb the calm of the place. This is because on that date it is celebrated the most famous saint of Patagonia's birth that was born right in Chimpay: Ceferino Namuncura.

Ceferino was a Mapuche indian that was born in 1886 and that devoted much of his short life to helping his people. It is now named Blessed by the Catholic Church, and many great miracles are attributed to him by what is popularly known as the saint of the region.

The catchment area of ​​the town, along with Chelforó and La Japonesa, connecting the province of Río Negro to La Pampa, has an area greater than 10 000 hectares systematized and under irrigation almost in its entirety.

The economic projections in this town and its development are linked with the potential risk of a significant area (30 thousands hectares) as a result of the construction of irrigation Chelforó, Chimpay, Belisle and Darwin. This is a project dating from 1928, delayed for decades, that is an urgent need for fruit and vegetable producers in the area. 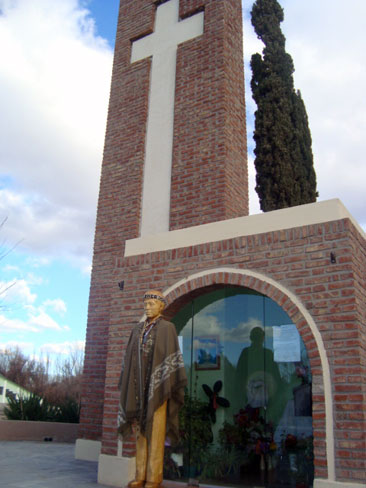 Cherries and Ceferino are synonymous of Chimpay. Shrine of the Saint of Patagonia. Photo courtesy of Cecilia Ruz.

The project consists of an intake at Chelforó with a capacity of 30 cubic meters per second, that as well as increased possibility of water in the area currently under irrigation, it will allow to incorporate other important area in the short term.

Origin of the name and foundation

Chimpay is of Mapuche origin and it literally means "return", "cope", "arch" and is attributed to a pronounced bend of the river that exists in the vicinity.

On June 2, 1879 arrived at the place Desert Expeditionary Army. Lieutenant Colonel Manuel Olascoaga, surveyor of the campaign, described the area of ​​the desert as "a beautiful place where you cross a long eyebrow willows between two ravines that descend into an imperceptible slope to the water".

The people was witness on July 1, 1899, of the opening of the railway Neuquén-Bahía Blanca line in the presence of Julio A. Roca. The event was planned in Fort General Roca but the flood that devastated that city stopped the official delegation in this place.

On June 27, 1971 it was opened the first monument to Ceferino Namuncura and the paved road that connects it to the National Route 22. The place is the site of annual pilgrimages that attract real crowds of devotees of the blessed.

As the founding date is unknown, in 1970 the provincial government established by decree corresponding celebrate the day coinciding with the death of Ceferino Namuncura, which occurred on May 11, 1905.