Copahue, a town at the foot of the volcano See map

Copahue or "sulfur" in Mapuche language, is located in the northwest of the province of Neuquen, in Patagonian Andean mountain range. It is a small town at the foot of the volcano of the same name. It is located 377 kilometers from the city of Neuquén and 1147 km from Buenos Aires.

The depression in which is located has a volcanic relief which was subsequently eroded by glacial action, and is limited to the north, east and south by rugged mountain ranges walls exceeding 2000 meters above sea level. 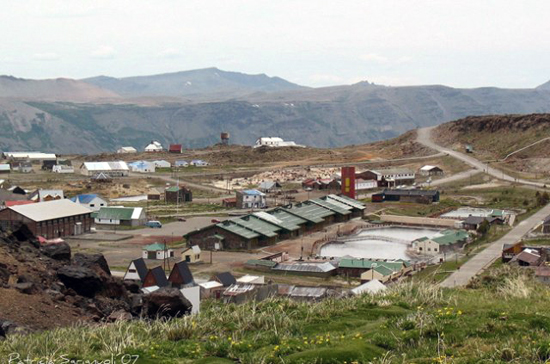 The thermal areas that characterize the region, are of surface currents or infiltrated from the melting of the snow that cover the area.

Copahue hot springs are recognized internationally for the quality and diversity of its waters, whose therapeutic properties have the endorsement of the World Health Organization.

It is a transition zone between three major ecological regions: the Altoandina, the Subantarctic and Patagonia, with the addition of some elements of the contiguous regions of Chile. In the area can be found red and gray foxes and pumas. Among the birds you can spot condors can be mentioned, eagle, Patagonian gulls, geese, bandurrias and others.

Copahue area forms the northern boundary of the distribution of Araucaria araucana or Pehuén in Argentina (the southern border is up to San Martín de los Andes, south of the Province of Neuquén). Araucaria araucana, constitutes the natural heritage of the place, as well as being an ancient species, the tree is very symbolic in the province and the Mapuche communities because their fruit, piñón, base of their food. 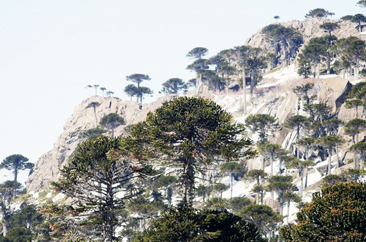 The town of Copahue only home "swallows" residents who come to serve in the balneotherapy resort, hotels, inns and restaurants of the town during the summer season (December to May). When the snows begin to fall and intensify, the spa town is buried under the snow and the people must return to their homes and leave Copahue until next summer.

The story tells that the pehue nche indians have found that these subsoil emanatios had healing powers, and despite its sulphurous smell they not deprived of the bathrooms. Before doing in case an offering to Aún-Co, the owner of the baths.

The Creoles, however, reach it in 1870 when Dr. Pedro Ortiz Vélez (Argentine doctor resident in Chile), obtained permission from the chief Cheuquel to bring their sick people.

By 1930, Copahue emerge spontaneously by use of waters in the area. The first hotel accommodations were built by private initiative. The balneotherapy resort is built in the 80's. Currently has a capacity of more than 2,000 daily treatments and varied hotel infrastructure that runs from November to April due to several feet of snow in winter almost completely covers the spa town. 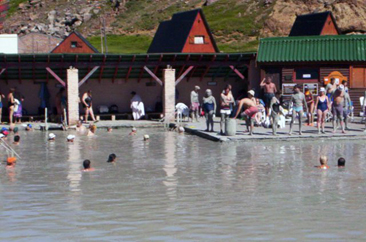 The spa is one of the main activities taking place in Copahue. The thermal waters are known worldwide for its therapeutic properties. The treatments carried out are advised by medical professionals from the Thermal resort, combining the various water vapor and sludge, balneotherapy (immersion baths or hot tubs), mud therapy, mesotherapy, physiotherapy and gymnastics.

Its unique landscape with undulating terrain highlighting the volcano form an original and unique landscape, whose geological origin is volcanic with modifications by glacial action. It is a place conducive to relaxation and recreation, where you can develop different activities such as trekking, mountaineering, winter sports and water sports.

Hunting and fishing are other activities that can be done in the farms of the area.

You can arrive via terrestrial means (the route is completely paved) and in winter direct charter Capital Federal / Caviahue. From Loncopué to Copahue van or remises services are offered as well.

From Chile, the International Paso Pino Hachado transit 179 km of national paved routes No. 22 and No. 40 and provincials No. 21 and No. 26. After traveling 18 km through provincial road No. 26 is up Copahue.

Copahue Provincial Protected Area The towns of Caviahue and Copahue are in a unique natural setting where you can observe forests of araucarias typical of Patagonia and you can also enjoy the hot springs that emanate from Copahue volcano.
The Hot Springs of Copahue: relaxation and healing Copahue is located at the foot of the Copahue volcano in Patagonia and is world famous for its hot springs of great therapeutic value.
Geothermal well, Las Mellizas, Las Máquinas and Las Maquinitas The area between the volcano, Las Máquinas and Copahue is a geothermal field that is used by the town for energy and other thermal uses.
Technical information of Copahue thermal baths The waters of Copahue Thermal Resort have different technical and curative properties that are used for the treatment of various illnesses.
Health, beauty and relaxation in Patagonia with the hot springs of Copahue In Copahue Thermal Resort a series of thermal programs can enjoyed by those seeking to improve their health, relax and beautify the body in a natural way.
Summer season in Copahue Copahue Thermal Resort opened its summer season. The rates of hot springs vary between 30 and 60 Argentine pesos.
See all Articles