The Valley of the Dinosaurs and more ...

In Mapuche language Chocón means "man shivering with cold water or soaking". A name that suits it, since 2 kilometers away is one of the most important hydroelectric dams in the country.

Aerial view of the hydroelectric dam.

The town of Neuquén province was born from the monstrous feat of engineering that is providing power to half of Argentina, but for years it was only a transit place in route to Bariloche or other points of the mountain range. Specific discoveries in the area would make it known by the other reason and making it from a simple settlement for the workers of the dam to a resort and national reference for paleontology. Is that in El Chocón were found the most amazing dinosaur remains.

At the same time, visitors have discovered areas of great beauty and rarity of the artificial lake of the dam, so are not quite a few who plan a few days at the edge of it for camping, fishing or hiking.

The Villa El Chocón is located on the north bank of the artificial lake Exequiel Ramos Mexía. It is surrounded by high walls of red to deep purple with desert plateaus, form the typical Patagonian landscape.

Distance of 83 kilometers from the capital city of Neuquén, the village is accessed by National Route 22 and then spliced ​​with N° 237. The latter communicates the high valley of Río Negro and Neuquén with the Andean region and the Republic of Chile.

The climate is arid steppe, dry and windy, with hot summers with an average temperature of 24 degrees Celsius while in winter the average is between 4 and 6 °C.

In 1967 the National Company Hidronor S.A. began to work on the complex Chocón-Cerros Colorados for the purpose of flood control of rivers, reduce the effects of prolonged downspouts, increase the areas under irrigation and generate electricity. Along with the works, it was made a permanent building harmonious contemporary urbanization: Villa el Chocón, which was finally formed as a township on October 31, 1975. 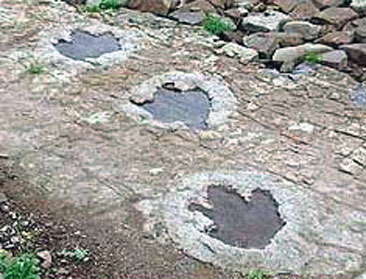 Its location and features make that El Chocón is increasingly the venue for mini-tourism, to have activities to do throughout the year.

Undoubtedly, the dinosaurs are the major attraction. In the town is the Municipal Museum Ernesto Bachmann of the Villa showcasing the exemplary largest carnivorous dinosaur in the world: Carolinii Giganotosaurus.

You can also visit the Valley of the Dinosaurs and places of findings of traces and paleontological remains as know the Petrified Forest. This tour can be combined with a visit to a hydroelectric dam.

On the lake of the dam, the Ramos Mexia, you can perform all sorts of activities ranging from fishing and boating to water skiing, without mentioning trekking and camping in the surroundings of beautiful cliffs.

Giant's land Villa El Chocón is known for the "Valley of the Dinosaurs", declared a national historic site in 1997. Here were made important discoveries that stands between the largest carnivorous dinosaur of all time.
El Chocón Hydroelectric Complex The hydroelectric plant of El Chocón is located at the northern end of the artificial lake Exequiel Ramos Mexía. The dam was built for the purpose of flood control of rivers, reduce the effects of prolonged downspouts, increase the areas under irrigation and generate electricity.
Lake Ramos Mexía of El Chocón The artificial lake Exequiel Ramos Mexía is the largest in Argentina, there it can be practiced fishing as well as various water sports like boating.
Aldo Beroisa: an artist dedicated to bringing us the dinosaurs Aldo Beroisa is a cartoonist and sculptor of El Chocón that is responsible for making the models and drawings of dinosaurs from the local museum.
Different circuits in El Chocón El Chocón offers several circuits that have fabulous sceneries, geological and paleontological attractions.
Rubén Carolini, the discoverer of the largest carnivorous dinosaur Ruben Carolini, a paleontologist by adoption, was who discovered the largest carnivorous dinosaur of the world in El Chocón.
Villa El Chocón Museum The Paleontological Museum of El Chocón has the fossil remains of the largest carnivorous dinosaur in the world.
Escondido Canyon in El Chocón 3 kilometers from El Chocón it is the Escondido Canyon, a canyon where you can learn more about the past in these lands and that inside it you can see dinosaur footprints in different positions.
See all Articles