The studies and dinosaur findings in the area

Dinosaurs are among the most successful organisms on Earth of all times, to have a reign that lasted more than 150 million years until their mysterious disappearance 65 million years ago.

Some of the world's most spectacular findings are from Patagonia, and especially of Villa El Chocón, city of Neuquen province, born from the construction of the hydroelectric dam of the same name. 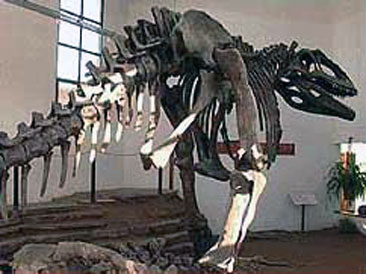 Studies in the town began in 1987. In that year the paleontologist Jorge O. Calvo and geologist César Gazzera from the Natural Sciences Museum of the National University of Comahue, conducted a major icnologico study in the region.

This same investigation led to exhume and examine three important dinosaurs: the Ribachisaurus Tessonei, the Andessaurus Delgadoi, primitive dinosaur about 15 meters long (reported by a resident of the Villa, Alejandro Delgado) and Limaysaurus.

Ruben Carolini In 1993, a resident of El Chocón, starred in an amazing discovery. It is about the largest carnivorous dinosaur of all time, bigger even than the Tirannosaurus Rex. This new dinosaur has been studied by two paleontologists in the region, calling Carolinii Giganotosaurus: "giant southern lizard" and as second name the one of his discoverer.

The dinosaurs, whose footprints were preserved in the rocks around the lake Exequiel Ramos Mexia, lived 105 million years ago. In those ancient times the area of ​​El Chocón-Pichi Picún Leufú was a relatively flat area in which there were gaps in shallow but of very long extension, united perhaps by slow-flowing rivers.

The warm and humid climate with dry seasons, probably subtropical, gave the landscape a desert look very different from which presently stands. On its banks there was a varied and numerous fauna of dinosaurs, crocodiles, turtles and frogs, which could have been permanent residents of the area. 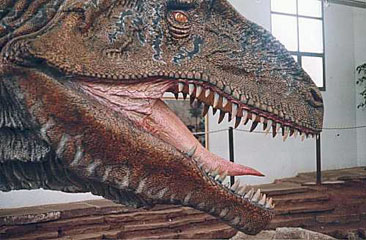 Copy of a "dino" in the Municipal Paleontological Museum of El Chocón.

In 1997 a law declared "national historic site" to "Valley of the Dinosaurs". The area declared historic is bounded on the north by the intersection of National Route 237 and access to the village and dam El Chocón; on the south by the intersection of that route and access to the town of Picún Leufú; on the east by shoreline of the lake margin Exequiel Ramos Mexia, and on the west by an imaginary line parallel to the coastline at five kilometers of it.

Over 65 milion years open their way into the mysterious underground around El Chocón. The erosion of the cliffs carved an undulating desert, full of stones and bones, that hides a treasure without equal in the world, 'the valley of the dinosaurs".

There is also a petrified forest, which covers over 120 hectares with 1,200 trees that are about 100 million years.

Some of the fossils so far have been found under these red soils are:

The Villa El Chocón allows research and tourism ensuring the preservation of these priceless assets that the land hide inside it.

El Chocón Hydroelectric Complex The hydroelectric plant of El Chocón is located at the northern end of the artificial lake Exequiel Ramos Mexía. The dam was built for the purpose of flood control of rivers, reduce the effects of prolonged downspouts, increase the areas under irrigation and generate electricity.
Lake Ramos Mexía of El Chocón The artificial lake Exequiel Ramos Mexía is the largest in Argentina, there it can be practiced fishing as well as various water sports like boating.
Aldo Beroisa: an artist dedicated to bringing us the dinosaurs Aldo Beroisa is a cartoonist and sculptor of El Chocón that is responsible for making the models and drawings of dinosaurs from the local museum.
Different circuits in El Chocón El Chocón offers several circuits that have fabulous sceneries, geological and paleontological attractions.
Rubén Carolini, the discoverer of the largest carnivorous dinosaur Ruben Carolini, a paleontologist by adoption, was who discovered the largest carnivorous dinosaur of the world in El Chocón.
Villa El Chocón Museum The Paleontological Museum of El Chocón has the fossil remains of the largest carnivorous dinosaur in the world.
Escondido Canyon in El Chocón 3 kilometers from El Chocón it is the Escondido Canyon, a canyon where you can learn more about the past in these lands and that inside it you can see dinosaur footprints in different positions.
See all Articles