Aldo Beroisa: an artist dedicated to bringing us the dinosaurs See map

When the evenings begin to distill spring, the spirit becomes restless, and you start thinking about where to go, what place can take all the fatigue of the week to bury it completely and return with renewed vigor.

Where can we go?

The choices are endless in a geography as vast and varied as Patagonia, which can only be constrained by your preferences. Some prefer the mountains, others the sea, others walking on asphalt as far as possible from nature, in short, is a matter of taste. 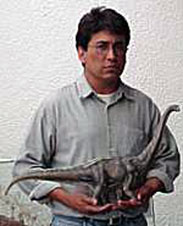 Aldo Beroisa and one of his models.

Dinosaurs and their surroundings are one of the offers chosen. And while paleontological museums are numerous throughout Patagonia, El Chocón has an additional attraction: Aldo Beroisa.

Cartoonist by vocation and artist by profession, or vice versa, this young man brings added value to the paleontological museum of the town, with drawings and models of these ancient animals that grow and are born between his fingers.

Patagonia.com.ar was there in his workshop, and trying to find out who is the "man who makes dinosaurs", we found that the spaces are increasingly populated and more visitors are immersed in the mysterious world of big lizards. Just sounds are missing, but the silence and peace of the village help to imagine them.

Aldo Beroisa is a cartoonist and sculptor who has a studio in a corner of the museum of El Chocón, where he recreates fragments of the life of Cretaceous animals whose remains are the heritage of the area, to complement the research work of scientists. 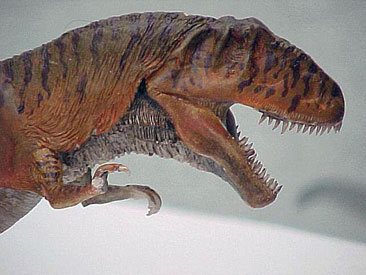 Model made by Aldo Beroisa.

In his work it's more art than science but nothing is invented, as there is a work of over one hundred years in paleontology behind that supports the drawings and models. All dinosaurs's artists follow a line based on this knowledge. They create and study, because the remains found are just bones, and little is known of the muscles and skin to complete it. But still there are certain morphologies that are globally accepted at scientific level.

Aldo's work requires a major study on these questions, it is an interrelationship with specialists who provide the framework for his art and creativity. The current wildlife also serves as a model, since it is known that there are many birds that have similarities or are descendants of those great exponents, and comments provided much information to the drawings and models. The legs of the Australian emu, the creole rhea or even the same domestic hens have similarities with those of their predecessors. This is known because in some footprints that were recorded it can be clearly seen the pad that possess these birds under the legs.

To compose the muscles, paleontologists freeze animals, section them, and from there they copy and put back the "dinos".

For artists such as Aldo, everything else is imagination, fantasy and lots of magic. Assume the poses, attitudes, and to impart a character to each of their models is something that depends on its absolute creative freedom. Often the position of a bone in a discovery is more than enough for Aldo's mind goes and his hands, nimble and prolific, engender a product that is much more than a figure of polystyrene, polyurethane and epoxy putty: an authentic dinosaur. 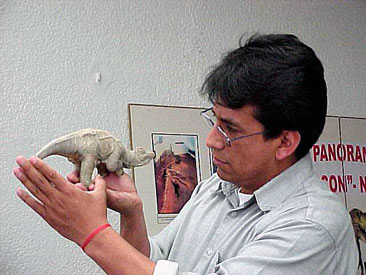 Aldo with his creations.

"Someone who loves life, loves his family, who thanks to life where it is. Every day I thank God. When I get up in the morning, hear the birds, nature and the quality of the place help me much. I love my son deeply, I have devotion to my baby, to my lady, who is a great companion. I am a grateful of life, of God, of nature, of people that there is here, who believe in me, who hope in me. Because every day I wake up thinking about generate things that serve the people".

Is that your goal?

"Yes, sometimes I met with destroyers, which are everywhere, but I'm convinced I have the strength, I have a clean heart and a cool head, because you have to keep a cool head to produce things and put aside what does not serve".

How much of Aldo's fantasy is in each of your jobs? 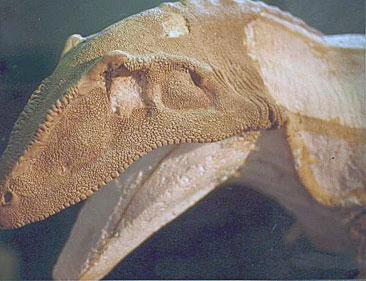 Countless models stem from his hands.

"Eh. .. with this I come since I have eight years old, seeing the whole subject of dinosaurs. I went to elementary school when it was found the first pleciosaurio in Jacobacci Engineer. That stucked in my retina, it was in my head, stucked in my imagination, to be able one day ... I don't know, to generate both drawing and sculpture. It's my passion. And then I fly, fly, fly ... I wake up and fall asleep thinking about it. I think it's my life and live of it, of what I genre".

One life, many stories
Why get here, for how many jobs and how much did you spend?

"Uh!. For many things ... My first job was as a waiter in a cafe, my dad was a railroad man, my mother a cook, one of the largest in the world, because she worked at the Llao Llao Hotel, she cooked for Eisenhower . When Eisenhower was in the Vella Vista Hotel she cooked for him, that is an honor for me.

Dad is a hard worker, in thirty-six years of work he didn't go to work only once, and now he earns 350 pesos. He worked on the railroad rolling stock, he fixed them. When I was a boy I went with him and then I was a railworker too, and I began to study.

I wanted to be a cop, I wanted to be a soldier, I wanted to be federal police and could not, because I had three serious accidents. I was always very restless and I'm all beaten, all broken. When I was said "do not mess", I got, and life marked me for that, I'm burned, I'm cut. Well, that's how I grew up with the railroad, which gave me education, and today I am what I am because Dad worried about for giving me love, affection and ultimately the culture of work, now unfortunately lost. 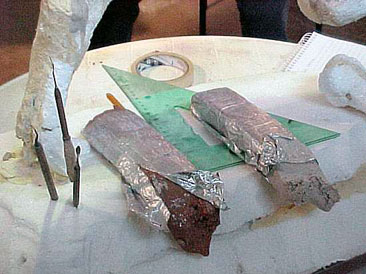 The tools of the artist.

I worked on the railroad, I was a locomotive driver, I was living in Bahía Blanca and working across the line".

And then he ended up in Neuquén, and life, or a friend put a woman on his way. He married, formed a home, globalization came and he fired from railroads. He sought a living doing "what to paint," but always drawing, always making dinosaurs, "always some nonsense". Designing cartoons in the squares, doing murals, painting letters and figures about motorcycles and race cars he was getting the few pesos that allowed him to survive. But he persisted in his art, against all odds.

"I love painting and I was creating my own area of ​​work by accident. One thing brought the other and people liked a lot what I was doing".

On the paleontology topic Aldo has a teacher: Rodolfo Coria, one of the leading scientists in this field. He was also working to Jorge Calvo, with advice from Leonardo Salgado and people of the United States, as Phil Curry on the issue of pteropods, Luis Chiape from University of Los Angeles at California in sauropods and eggs. He is currently working with Edith Simon, a biologist at the museum in El Chocón in the creation of an "paleobiótico" system.

The drawings are highly detailed.

Aldo Beroisa built his works in polyurethane, polystyrene, cardboard, paper, wire and to the details, the fine and delicate work, he use epoxy putty. A figure of 70 cm wide by 40 cm high watch us indifferent while it awaits for being a full-fledged dinosaur.

It suffers its genesis passing from the mind of Aldo, where it's only a single idea that emerges at any time, and there begins the creavity.

"I do not draw it, I just look at the measures, I sketch the head in my mind and start to build it, I'm moving ... I do not know, I do not know how they hands go, but keep the pace said by my head. I can not do a sketch on paper of this work, It is all done at once, I can not explain why I get, it goes out alone and it is emerging as I compose it".

The model quasi dinosaur behind us will take just over two months to be ready, with days of seven or eight hours of work. Aldo looks much his things, his products, and no wonder, because they are invaluable or at best cases he does not fit the dictates of the national economy.

His black pen drawings are astounding realism. The expression of the animals transported us to ancient times and turned them into true works of art. For anyone interested in having an original drawing by Aldo as those exhibited in the museum (70 x 50 cm), he must have two thousand pesos (argentinean). Otherwise, for much less money, say a few hundred dollars, you can get a copy. Sometimes he donated, when it "comes from the inside" because he draws so that others feel good and it also rewards the artist, so that not everything happens for a commercial transaction.

In the museum of El Chocón is a reproduction of the natural size of the head of a Giganotosaurus Carolinii that Aldo did. It was a special request from the National University of Comahue, which took him three months because in the middle he had to undergo a liver operation. And there was an assistant luxury, his wife. The chips or flakes that cover the head are made and stick one by one, and as she is skilled in modeling, she continued the task while Aldo recovered himself. 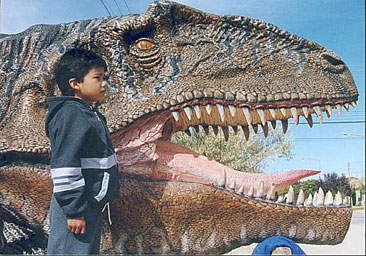 Here you can see the size of his most important work: the head of giganotous.

This head took the modest figure of three million chips, sixty kilos of epoxy putty and thirty polyurethane in a piece that is 2 meters long and one meter high and it is quite extraordinary.

Twelve or thirteen hours of work do not bored him at all, and if that happens he stands up and walks around the village to renew the inspiration. He drinks some mates with his wife, sees his son grow up and then returns with oxygenated ideas, with the spirit alert and expectant waiting for a new look that is sure to become a last best work, because for artists the last is always exceeded.

He spread his enthusiasm, it is the epitome of a passion and a dream come true. He wanted to live on what he liked, draw, sculpt, and he made it. Maybe that's why his figure and expression are harmonious, his movements are slow but firm, resolute. Aldo Beroisa is "the man of the dinosaurs" and is the man who got build his life around a dream that began when he was just eight years.