Referring to those people who saw the light next to the railroad tracks, Ingeniero Jacobacci is today a town of no more than 7 000 people nestled in the middle of the desert, in the middle of nowhere.

Head of the South Line of the province of Río Negro, now it fights for progress preserving its identity and memory, that of being the land of indigenous peoples. 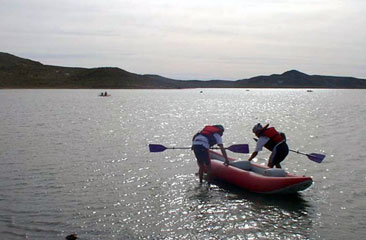 Kayaking trip in the lagoon Carilaufquen, which has the feature of freezing completely in winter.

The climate is typically arid desert, resulting in an economy basically cattle. Its culture lies in diversity, since in Jacobacci, as in many other places, it really came true that of the melting pot.

The great struggle of its people is to keep alive at any price its attachment to the land and the man who works it. That is what is life in Jacobacci: customs unchanged and respect for tradition.

The locality is situated in a encased valley known as Huahuel Niyeu, which, like other terraced elevations surrounding Jacobacci, it has been shaped by different geological processes that occurred in the area. There, intermittent streams that descend from different points by valleys and canyons converge in the great depression formed by lagoons Carrilaufquen Chica and Grande. They are from pluvionival regime and its highest throughput is registered in spring to early summer.

Jacobacci is located 210 km east of San Carlos de Bariloche and 642 km Viedma, the capital of the province. This city, located at 900 meters above sea level, was named after the engineer that plotted the railway which gave impetus to the town and area.

Antropological and Historical Museum Jorge H. Gerhold in Jacobacci The Museum of Ingeniero Jacobacci offers a tour of the history and culture of the city, besides being able to see fossils of dinosaurs that inhabited the region millions of years ago.
The cities of the Southern Line of Río Negro We present you a glimpse through the towns of the South Line of Río Negro, mostly livestock farmers and with the most important appeal of having close the Plateau Somuncurá.
Provincial Michay Festival Ingeniero Jacobacci prepares every year to enjoy the Provincial Michay Festival, a feast that shows the work that artisans and producers do and which highlights the benefits of the fruit of the michay.
See all Articles