The cities of the Southern Line of Río Negro See map

The southern region is located in south central province of Río Negro between the major tourist cities, San Carlos de Bariloche and the beach Las Grutas. Most of its towns are connected by National Route 23, which goes from Bariloche to Viedma.

The region has an attractive and unique "countryside" in its vast territory, with steppe vegetation, archaeological and paleontological fossils. 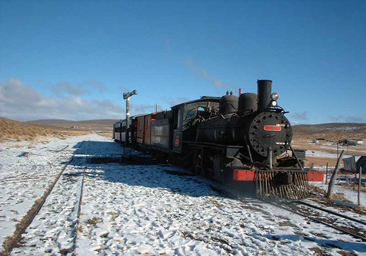 The passage of La Trochita by Ingeniero Jacobacci.

The first city that we mention is DINA HUAPI, a constantly growing place. It is located where it starts the Patagonian steppe, 15 km from Bariloche, and has a particular microclimate, with little snow in winters and warm summers.

Its name derives from Dina (short for Danes, who were the first settlers) and Huapi (island in Mapuche), because of Lake Nahuel Huapi.

In this city you can visit the majestic Lake Nahuel Huapi, the Ñirihuau river, for recreation and fishing, the Leones Hill and the caverns of an old volcano, the lagoon Los Juncos and Perito Moreno railway station.

Following the National Route 23 heading east you find PILCANIYEU, whose name comes from the voices araucanas Pilkan (ducks) and Niyeu (place), what is "place of ducks" or "where there are ducks."

It is located 82 km from Bariloche, in the foothills of the Andes, on the ancient Patagonian Massif, with hills composed of ancient crystalline rocks. The waterways in this area have a unique slope, where the most important is Pilcaniyeu river which is born on Villegas hill and empties into Limay river.

Among the favorite destinations are Pichileufu river for sport fishing and wildlife watching; the circuit to Villa Llanquín and the raft Maroma; the rural settlements of El Triunfo, El Alfa and Huerquen; the Petrified Forest, the museum of the town and cave paintings.

If we go 40 km more we will find COMALLO, located in the valley of the stream with same name almost leaving from the foothills of the Andes. This stream is the most important watercourse of the place, which supplies water to the village and the fields that are nearby.

When passing through the village is a stream valley encased in a very high walls steppe with great steep and red terrain. One of these elevations is called La Cruz hill. In addition, other attractive features of the place are Tracaltahue natural amphitheater, the Pilquiniyeu of the Limay, alfalfa farms and brick kilns.

Ahead lies INGENIERO JACOBACCI, which is 210 km east of San Carlos de Bariloche and 642 km from Viedma.

The city of MAQUINCHAO was born with the railroad to Lake Nahuel Huapi, whereas before there had been some military expeditions. The origin of the name corresponds to two words tehuelches "Maguen" (winter) and "chawe or kawe" (place of) and it means "winter" or "place where to pass the winter". It is located 300 km from Bariloche and 572 Viedma. 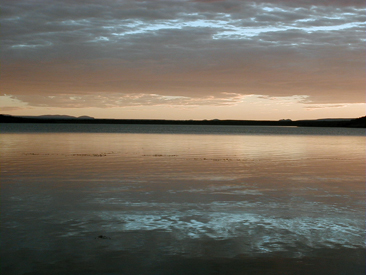 The lagoon Ne Luan in the surroundings of Maquinchao.

It follows Maquinchao, the town of LOS MENUCOS, characterized by the production of stone slab, to which they pay tribute in February.

87 km further east is SIERRA  COLORADA, an area of ​​plateaus and small hills, which owes its name to the color of the mountains that surround it. The town is located on a major depression characterized by broad valleys surrounded by mountainous formations of low height and small slope.

There are streams with seasonal flow and seasonal ponds are formed that when they have water they are sites that attract a diverse avifauna. Other places to see are the Ganzú Lafquen Hill, the Hills Ingeniero and Blanco and the handicraft production.

Just over 50 km to the east (to 339 de Bariloche) is RAMOS MEXÍA on one edge of the Plateau Somuncurá. It was named after the former national Minister of Public Works, Ezequiel Ramos Mexia, that when he occupied that position, the top rail came to this site.

At few meters from the village there is a fence and down, it is Bajo de Ramos, a farms area, the historic water intake and Tunquelen. Then, towards the area of ​​Treneta and Yaminué, there are very steep walls, above which lies the plateau Somuncurá itself. Other places to visit are the central Square, the Station, the Corridor Pichimalal with Mapuche culture, cave paintings and the "chenques" (Indian graves).

Going 100 km east more we find VALCHETA, considered the East or Oriental Portal to the South Region. Is an area of ​​plateaus, where to the south you access Somuncura Plateau, through Chipauquil. Its name comes from the voice tehuelche meaning "narrow valley," murmur the waters, "chiguente" murmur of waters and people screaming.

The importance of this place is mainly to have enabled the development of agriculture in the region through various fields bordering the creek to the south.

Among the destinations to be visited are the production of handicrafts and "Matras" (looms); the regional museum that has palaeontology, history, archeology and paleontology; the petrified forest; lagoons Punta de Agua and Curi-có; mines Amelia (fluorite) and San Martin (walfram), and in the Plateau Somuncura area: the town of Chipauquil, Lonco Vaca, Corona hill, the Naked Mojarra, the lagoon Azul and the Well Wind Cona Niyeu.

Finally, we mention ÑORQUINCO, which is not on the same route, but this town is accessed by the Provincial Route 6 and National 40. It is 180 km from San Carlos de Bariloche and 700 km from Viedma. Its name comes from the word Tehuelche, Ñorquin (plant of) and Co (water), meaning "water plant".

Since Ñorquinco you can visit the establishment Chacay Huarruca; the railway station and bridge, the Chico River and waterfall, the Las Minas creek, which begins in the Chubut River.

Antropological and Historical Museum Jorge H. Gerhold in Jacobacci The Museum of Ingeniero Jacobacci offers a tour of the history and culture of the city, besides being able to see fossils of dinosaurs that inhabited the region millions of years ago.
Provincial Michay Festival Ingeniero Jacobacci prepares every year to enjoy the Provincial Michay Festival, a feast that shows the work that artisans and producers do and which highlights the benefits of the fruit of the michay.
See all Articles