This town in the region of Middle Valley of Negro River is the capital of tomato per excellence. It is called so because much of its economy is based on this crop, and thus it is celebrated the National Tomato and Production Festival each year. 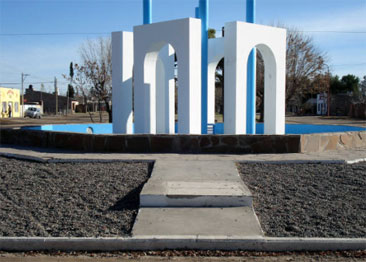 Fountain of the city of Lamarque.

It is located on Provincial Route 250 and has a comprehensive network of services. In education it has five elementary schools, kindergarten, high school and adult school and a Department of Distance Education. They also run free schools for adults, one folklore municipal and another special.

Health is in charge of a rural hospital and the private sector. Moreover, there is a historical museum, a paleontological museum and four clubs that gather the local sports activity.

Its main economic activity is fruit and vegetable and wine, but particularly the tomato crop and it is also important in logging and beekeeping.

The origin of the people and the name

On May 9, 1900 the National Executive created by decree a new population in the southeast of the island of Choele Choel. In 1901 it was instructed to the engineer Eliseo Schieroni the measurement and subdivision of the island in rural batches of 100 hectares, reserving four for town, according to Law 817, of 1,876.

Finally it were choosen the present location plots and they received the name of the Pueblo Nuevo of the Choele Choel Colony. Confusion in mailings addressed to Choele Choel, prompted the name change. So it was given the name of Lamarque in tribute to former Judge of the territory of Río Negro, Dr. Facundo Lamarque, a designation that was ratified by decree of July 20, 1942.

National Tomato and Production Festival in Lamarque Lamarque celebrates each March the National Tomato and Production Festival honoring the producer of that crop, main economic activity of the locality.
Paleontological Museum of Lamarque The Paleontological Museum of Lamarque has very important pieces and it have been working for several years to maintain and conserve the paleontological deposits of the area.
International Fried Cake Festival Each year in the town of Lamarque people gather for a celebration with lots of flavor. To weave the different ethnics and cultures of the city it is held the International Fried Cake Festival, so as to expose the customs of each region.
See all Articles