One of the most important areas of the south line of Río Negro is the city of Maquinchao. It was declared a Provincial Capital of the Wool in 2004 (3855 law of Río Negro) and therefore it is held there each February the Provincial Wool Festival, an event that pays tribute to the main productive activity in the region, sheep farming.

Located on National Road N° 23, it is at 300 from Bariloche and 572 km from Viedma, the capital of Rio Negro. It also has one of the Patagonian Train railway stations, linking the towns of Viedma to Bariloche. 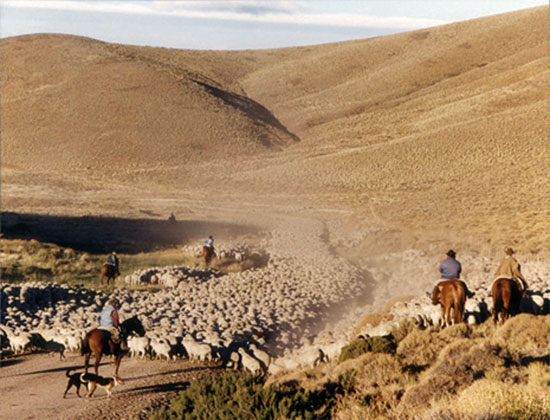 Herding sheep in the South Line. Photo courtesy of Ministry of Tourism of Río Negro.


Rural tourism has increased in recent years in the region being able to visit the farms La Proveedora, Maquinchao, Rucu Luan and San Juan. On the other hand, there are always the charms of nature that delight visitors such as: Ñe Luan lagoon and the creek that flows from the rock, the place of Hornos; Maquinchao Creek, which runs alongside the town and the spot El Caín, on the western edge of the Plateau Somuncurá. And we can not forget the caves and cave paintings of Vaca Laufquen.

The city was created with the construction of the railroad to the Nahuel Huapi. Whereas before there had been some military expeditions, it was only in 1912 with the opening of the local railway station that villagers settled in the vicinity of the stream Maquinchao settle in the present location.

However, residents have taken as the founding date of March 19, 1905, without taking into account that the towns of the south line were recognized by decree on December 7, 1927.

The origin of the name corresponds to two words tehuelches: "maguen" (winter) and "chawe o kawe" (instead of) and it means "winter" or "place to spend the winter".

You can see copies of sheeps in the area since 1908 when the first Australian Merinos rams were brought. And from that moment, it began to develop livestock farming which is now recognized worldwide.