In the town of Plaza Huincul it is a historical tour that pays tribute to the first settler of the place. This is the walk "La Pasto Verde", a name given to one of the first people who lived in the city. 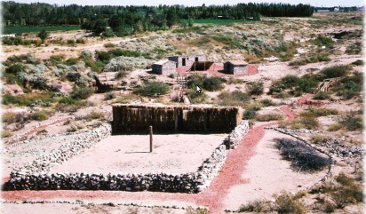 One of the pens that can be seen in the Walk La Pasto Verde. Photo courtesy of Municipality of Plaza Huincul.

The circuit is located 2 kilometers from the town square downtown, on the left bank of the National Route 22. At the entrance of the place there is a wooden gate that has the name of the ride. Once inside, visitors can tour the circuit of approximately 450 meters showing the different objects related to the life of "la pasto verde".

Along the route visitors can see different objects on the scene in reference to the time of the early twentieth century:

Who was the Pasto Verde?

The city records say the death of Funes was in 1916. Moreover historical artifacts, in the ride there is a monolith built in homage to the "pasto verde" and the tomb where her remains rest since her death.