To get to know the city See map

The town of Puerto Santa Cruz has an important historical content and a unique richness that can be seen in its various tourist spots. You can see beautiful landscapes with its sunrises and sunsets unique in the world and flora, fauna and history of the place that makes the city great option on your way through Patagonia, Argentina. 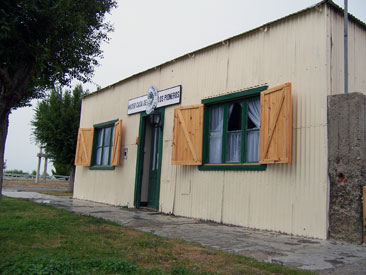 "House of the pioneers" museum.

We begin to know the historical context of the city. On this tour we pass by Carlos Borgialli Regional Museum, in which are machines, clothing, newspapers, utensils used by the Indians and a photographic archive that will take you from tehuelches native peoples up to today. There is also a natural environment reproduced by taxidermy of native Patagonian fauna and important paleontological, mineralogical anthropological collections.

The museum is located in an old building where was the Bristol hotel, a Social Club and a traditional trade village named "Harris and Company Commercial Office". Today is owned by the local municipality and was converted into a Cultural Complex, which houses the museum among other things, located at Avenida Piedra Buena 534. 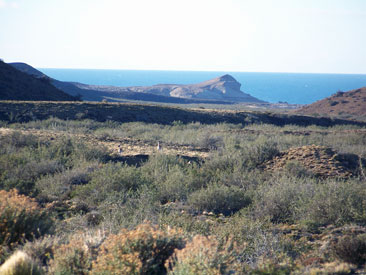 View of  MOnte León backgound and Canyon of the Gumps infront.

Following the history, the city has another museum called "House of the pioneers", located at Av Piedrabuena No. 124, which opened in December 2006. This house was built early last century, and was adequate to portray the experiences and customs of the first settlers of the area with period features such as a tavern room, kitchen and bedroom. It is one of the first buildings constructed on the shores of the waterfront and architecture retains the typical Patagonian style.

The flora and fauna

On the other hand, Puerto Santa Cruz is a starting point to explore other sites and appreciate the flora and fauna. These destinations are Pavón Island and Cmte. Luis Piedra Buena only 36 km, where you can visit the museum replica of the commander's house and the various species of birds, and for lovers of the coast fishing, this place is suitable for this in the period from November to March , where you can capture great examples of bass, perch, mackerel, etc. 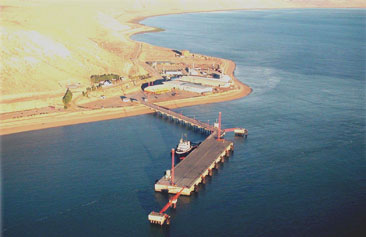 Monte León National Park or Coastal National Park, about 54 km from the city, joining the National Route 3 and then taking the Provincial Route 63 leads to this unique landscape between canyons and beautiful beaches. Also, when you are arriving on the scene, observed the "Canyon of the Gumps" when the route goes down, ideal for a picture.

Once on shore, tourists can see a mountain that resembles the shape of a huge lion lying and hence the name "Monte León". From there it ascends along the "Path Lobería" to the viewpoint of the sea lion colony, showing the colony of seals of a hair and you can also watch the island Monte León (Provincial Reserve) and three species of cormorants (gray, rock and imperial) that nest there. 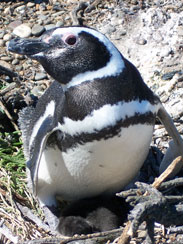 There are also Puerto Punta Quilla 17 km southeast of the town on the southern shore of the Firth of Santa Cruz river and 4.5 km from the mouth of it in the Atlantic Ocean, which is one of the best natural harbors on the atlantic coast. In which to dock large ships all year round and currently serves port support for oil operations.

And Punta Entrada Penguin spot 2.5 km walk along the coast from Puerto Punta Quilla important to the side of cliffs, where a large population of Magellanic penguins of 60,000 pairs. These come in September to complete their breeding cycle and are removed in April during the pelagic period. Furthermore the area is composed of high cliffs, islands, rocks, bays, beaches and sandbars that are discovered at low tide.

And finally you can stroll along the shore of the estuary of Puerto Santa Cruz that offers a unique landscape along the wide canal almost 2 km and the different shades of water based on time of day. Where you can observe birds and Commerson's dolphins and the remains of small boats that marked an era of burgeoning Santa Cruz economy. 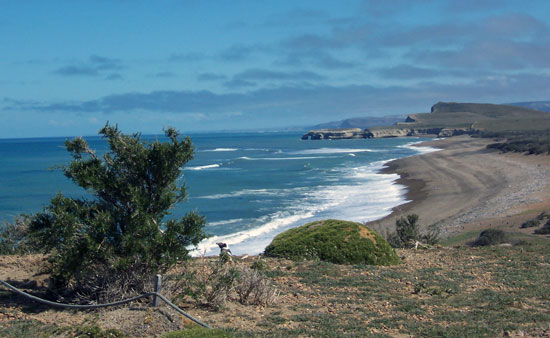 Provincial Snook Festival The Provincial Snook Festival is held every February in Puerto Santa Cruz. It is a sporting, artistic, cultural and tourism event including craft shows, concerts, the election of the queen of the festival and the traditional fishing competition "12 hours of snook" that convenes every year more fishing enthusiasts in the region and country.
Sailing Voyage in Puerto Santa Cruz In Puerto Santa Cruz it is held every year the Sailing Voyage in commemoration of Charles Darwin who visited Patagonia with Fitz Roy in 1833.
See all Articles