In Puerto Santa Cruz is held every year the Sailing Voyage in commemoration of Charles Darwin who visited Patagonia with Fitz Roy in 1833. 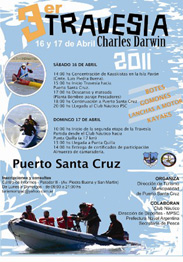 April 16 and 17 the Santa Cruz River was crossed by kayaks, motor boats, rubber rafts and boats. The first stretch begins in Comandante Luis Piedra and ends at the Club Nautico of Puerto Santa Cruz. The next day the second long stretch that reaches the port of Punta Quilla.

At the end of 1933, the Beagel boat in which were traveling Robert Fitz Roy and the naturalist Charles Darwin entered the Ria Deseado and when they were leaving they touched a rock that causes a slight fault in the boat and they decided to stop on the south shore of the Santa Cruz river where they repaired the keel. Hence the name of the port of Punta Quilla.

This journey recreates the passage of these passengers who sailed the Santa Cruz river almost reaching its source in Lake Argentino.

Provincial Snook Festival The Provincial Snook Festival is held every February in Puerto Santa Cruz. It is a sporting, artistic, cultural and tourism event including craft shows, concerts, the election of the queen of the festival and the traditional fishing competition "12 hours of snook" that convenes every year more fishing enthusiasts in the region and country.
To get to know the city The town of Puerto Santa Cruz has an important historical content and a unique richness that can be seen in its various tourist spots.
See all Articles