The Ria Deseado, on whose entrance stands Puerto Deseado, is a wonderful place to visit and enjoy.

Some even say it is one of the most beautiful natural formations of America. But also, it is indeed unique in geology and fauna, so it was named Intangible Nature Reserve.

The ria is a river that left its channel, and it was occupied by the sea. The Deseado ria is the only in South America, here the ocean tide influences to about 40 km of which would be the river mouth. 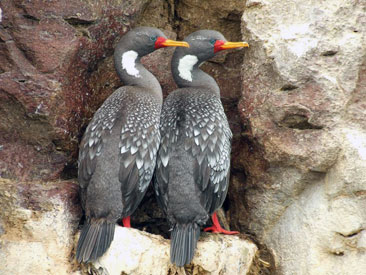 This landform that occurs on the Deseado river has eroded over the centuries the surrounding plateau and froming canyons worth to see. Especially from their viewpoints, such as Darwin.

But, as already mentioned, the ria is full of biological oddities. And the marine life that pervades this estuary is one of them.

The Magellanic penguin is common inhabitant of the ria from October to April and the main penguin are in Quiroga Island, Punta del Paso Islet, De los Pajaros Island and Chaffers Island.

In the Lobo Rock, which has exactly the profile of a sea lion, a transient colony of sea lions of a hair (fur worthless species) get out of the water to heat up at the sun on the stone. No shortage of male adventurers with 400 kg, that climb to 15 meters by their fins, or females who take dives from the cliffs. 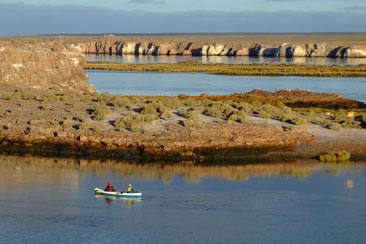 On the cliffs of the south bank, opposite the town of Puerto Deseado, nest five species of cormorants from the most common and less showy (the dark Biguá) to that of blue eyes.

There are three species of oystercatchers, these industrious birds that break mussels in flight dropping them on the rocks, but the most abundant species is the black-white with fluoride orange beak.

Among the many dolphins is the rare commerson dolphin, painted black and white, tiny and vivacious, whose hunting and export to traders in Japan was thwarted in 1983 by Federal Judge Garzón Funes in a case that established jurisprudence.

The climate in the ria has low rainfall, 200 mm per year, so the vegetation consists of low shrubs, and it is very windy, almost 300 days a year. In consequence sailing lovers enjoy fully of weather conditions to conduct their practices and competitions. There is also a sport that is especially the star: the kayak.