Some are known for their Hollywood debut with the film "Surf's up" or performances in films like "Happy Feet". Others are relate to the nickname "Bobo Bird Jumper." We're talking about rockhopper penguin, a variety of penguin that is distinguished by an eyebrow long bright yellow. 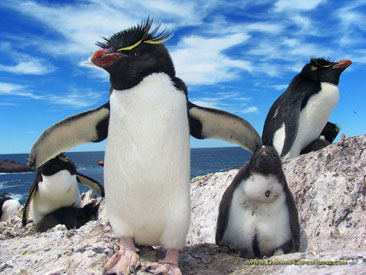 These penguins have red eyes and a long yellow eyebrow that extends from behind.

In Patagonia is not necessary to rent a movie to see them, every year from late October through April they approach the coast of the city of Puerto Deseado in Santa Cruz. In these months the city has the privilege of being the sole host of the Penguins and you may close, take pictures and enjoy them.

This is a colony of about 30 thousands of rockhopper and Magellanic penguins that nest and raise their young in Penguin Island Provincial Reserve. The latter is a protected natural area in the province of Santa Cruz, located about 20 kilometers from the city center and accessible with a short and colorful navigation.

Rockhopper penguins weigh about 3 kilos, reaching about 55 centimeters long. They are the smallest of the crested penguins. They are often called Bobo Bird Jumper by its particular way of moving by jumps.

The conservation status of this species is vulnerable due to the disappearance of 24% of its population over the past thirty years. 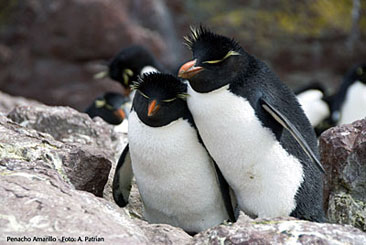 Parents take great care to their young and do not let anyone to get close to their nests.

These penguins belong exclusively to the southern hemisphere and in the world there are only three large communities that reach three million specimens. The areas are Argentina-Chile, southern New Zealand and finally the Indian Ocean.

The red eyes of the penguin, in contrast to the yellow of their brows generate a smile and feeling of tenderness for tourists who are able to see from a few meters, while they jump nimbly from rock to rock. But, yes, not to get too close because these creatures can be very bad when caring for their young is about, they do not allow them to endangered and are capable of attacking by beaks to unsuspecting tourists to protect them.

Because of its accessibility and proximity, Puerto Deseado is perhaps the best destination for sighting penguins. Scientists and visitors from around the world deep into the rocks of the island looking for a friendly and comfortable place from which to observe the nests, guarded at all times by responsible parents who formed one of the 250 families of Rockhopper. But of course they are not the exclusive owners of the island and, among many other species, Magellanic penguins, numbering thousands in these latitudes, and with its name pays homage to the intrepid traveler who had the privilege of discovering them in the year 1520, are also worthy of attention.